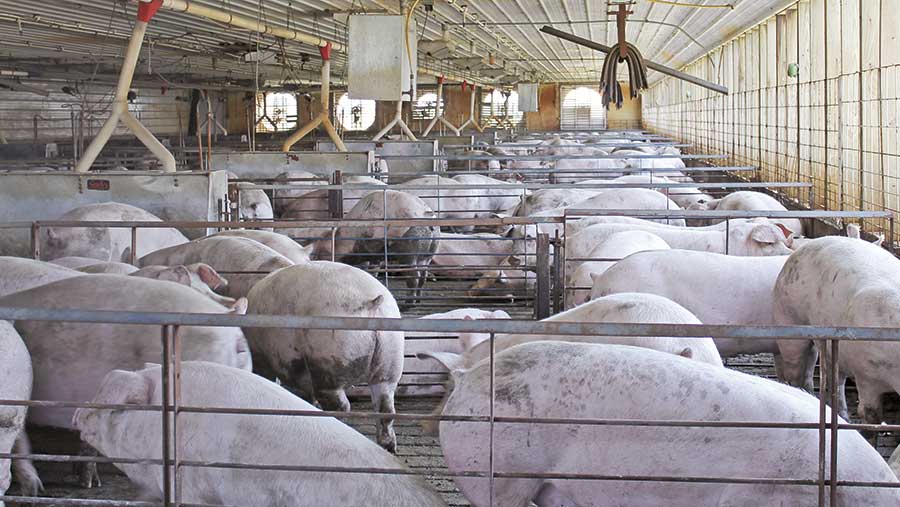 Set in the heart of the US corn belt, Iowa is a farming mecca. Mile after mile of maize and soya bean fields make this an ideal place for pig finishers, with all the feed they could possibly need right on their doorstep.

As a result, more than 6,200 farmers across the state produce one-third of the USA’s pork – 45 million pigs a year. But with this many farms in such close proximity disease is always a concern, so biosecurity has to be tight.

Olivia Cooper speaks to one contract rearer to find out more.

As a contract rearer Aaron Juergens oversees 100,000 pig places in a 250-mile radius from Des Moines to Nebraska. He visits every farm once a week, with farm staff on-site each day.

“Between 40% and 45% of pigs in the USA are contract reared,” he explains. “There are six or seven different companies within 100 miles and we don’t visit each other’s farms – if we do we have to take three nights and two days off.”

Pig farming in the USA

The site is owned by two brothers, from whom he rents the buildings, with Cactus supplying the weaners, feed, vaccines, disinfectants and so on.

Cactus has a breeding herd of 35,000 PIC sows, and uses DNA boars, with replacement gilts bred outside of the state in South Carolina, North Carolina and Georgia due to the lower disease pressure.

The pigs are kept in groups of 80 per pen, on slats, with the house heated to 26.6C, gradually reducing to 15.5C by six-months-old. “We have misters in the summer, which come on automatically at [27. 7C] for 30 seconds at a time, with tunnel ventilation to cool the shed down,” he adds.

All the piglets are tail clipped with boars castrated and kept in mixed groups with gilts. “We don’t clip their teeth and don’t have any problems with chewing – if that occurred it would indicate a problem with diet or ventilation.”

No growth promoters are allowed and a vet is required to prescribe antibiotics.

“We have a lot of seasonal [porcine reproductive and respiratory syndrome] around here, which brings secondary diseases like pneumonia,” explains Mr Jeurgens.

“[Porcine epidemic diarrhoea] can also be devastating. But while [post-weaning multisystemic wasting syndrome] was very bad when it first arrived, people have learned to expose gilts to it so there is now some immunity.”

Cactus has a target mortality of 3%, but is currently averaging 5% system-wide.

“We have seven different rations, formulated by Cactus, from nursery to finishing, and we feed ad-lib with automatic feeders,” says Mr Jeurgens. “Every 3t of feed is batch tested and stored, and we keep two years of records – including antibiotics use – for full traceability.”

About 20% of US pork is exported, so if Cactus gets a call from a Japanese customer it needs to have the data on hand. “Everyone is so worried about being sued that you try to make as few mistakes as possible – and that means we have safe food.”

Animal welfare is also extremely important, with cameras in the barn and on lorries for loading and unloading the pigs.

“Walmart has one employee who watches videos all the time – if customers want high animal welfare this is how we prove it,” he adds.

The farm is inspected once a year, with the well water and soil tested, as well as nearby rivers. “The farm owner takes the slurry – which is worth about $15,000 (£11,317) in nutrient content – in the spring and fall,” explains Scott Pollock, wean-to-finish manager at Cactus.

“He has arable land and he knifes it into the soil.” The unit is all-in, all-out, and is disinfected and left empty for 10 days at turnaround.

“We are usually contracted for 12 years when we’ve built a new barn, or three-to-five years with existing facilities. Here at Audubon the owner should net a 6-7% return just on the barns – which cost $1.5m (£1.13m) to build.”

With so many farms under his control, how does Mr Jeurgens ensure every unit is up to scratch?

“You can tell a lot just by looking and listening. The farm staff are here multiple times a day and walk the pigs to mark up any that need attention,” he explains. “Every pig gets looked at every single day.”

The integrated system works well, offering guaranteed margins even at a time of lower pig prices, says Mr Jeurgens. “And animal welfare is the highest it’s ever been.”