Balcony systems can offer a practical housing solution for pig units by increasing floor space within the footprint of existing sheds.

Few of these systems exist in the UK but they are likely to become more commonplace now that Red Tractor recognises them within its farm assurance scheme.

The certification scheme has provisos – the area provided by the balcony must not exceed 40% of the ground floor area and there must be measures in place to prevent manure and urine from falling on to pigs underneath the balcony – but there are workable solutions, says Emma Slater, environment and buildings knowledge transfer manager at AHDB Pork.

She recently saw balcony systems in action in Holland. “What seems so attractive about a balcony is that it is an economic way of giving your pigs more space and improving welfare, without having to invest in a whole new building,’’ she says.

What is a balcony system?

As the name suggests, it consists of a second-floor level over the ground floor, accessed by a ramp.

Manure is collected in a tank underneath the balcony or diverted to a slurry pit beneath the pen.

What do pigs think of them?

Research carried out at the Swine Innovation Centre (SIC) Sterksel, part of Wageningen University, showed that 95 per cent of pigs use the balcony.

“Having seen it on farm during our visit, this certainly seemed to be the case,’’ says Ms Slater. 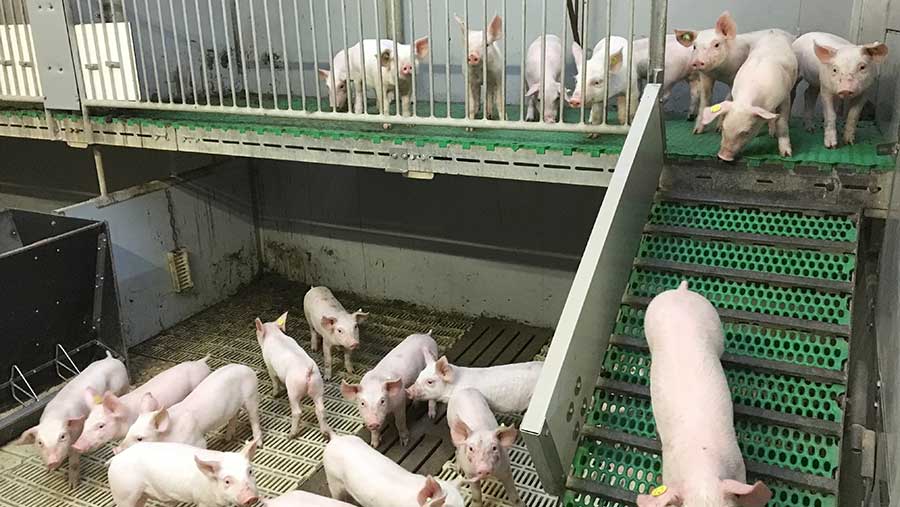 “The pigs looked healthy and happy and seemed to enjoy using the ramp and balcony area.’’

Whether introduced at weaning or at the finishing stage, pigs quickly learnt how to use the balcony.

Why are there so few in the UK?

Until recently, balconies were not recognised within Red Tractor farm assurance but the body has now developed its own set of standards based on the Dutch standards, with some additional requirements; these can be found on the Red Tractor website.

There is also the requirement that the supplier installing a balcony on a Red Tractor pig farm must provide the producer with a declaration that confirms the specifications have been met.

“This is predominantly from an engineering point of view, such as confirming loading weight of the balcony and gradient,’’ Ms Slater explains.

“Although this is not currently in the published standards they will be updated to include this.’’

She advises producers to speak to the certification scheme before installing.

The temperature on a balcony can be higher than on the ground floor. Is this a problem?

This is a very minor differential – the Dutch study showed it to be an average of 1C higher, which isn’t considered to be too much of a concern.

However, Ms Slater says is vital that the ventilation system and layout allows for sufficient air flow and ventilation in all areas within the pen.

This is not only important for ensuring the temperature of the building is controlled but also to encourage areas for lying and dunging.

They provide more variety for the pigs, allowing them to create their own areas and display exploratory behaviour.

Trials carried out at SIC have demonstrated that the system has no negative impacts on performance or welfare.

Sterksel is currently carrying out trials to investigate the benefits of providing straw and other enrichment.

Ms Slater says balconies are a new option for producers looking to improve the environment and welfare of their pigs.

“This adds to the image of an industry that keeps evolving and innovating to achieve better pig health and welfare within a range of different production systems,’’ she says.

With increasing litter sizes, it allows for family groups to be kept together. It also prevents over-stocking. 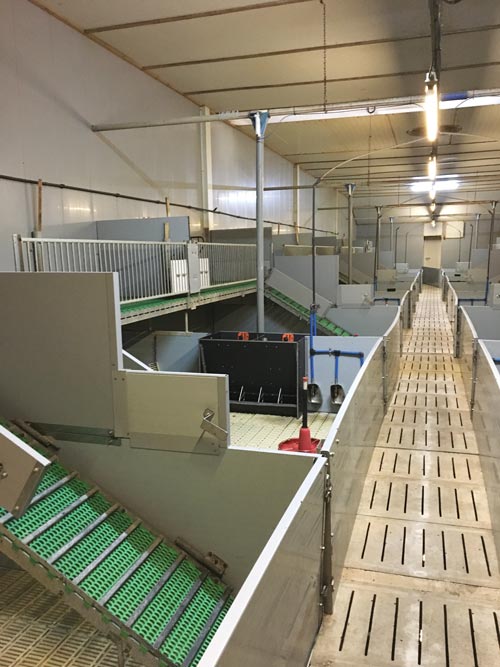 The UK welfare code states that for finishing pigs up to 110kg, a minimum unobstructed floor space of 0.65m2/pig is required for pigs housed in groups; above 110kg, this increases to 1m2/pig.

“It should however be noted that stocking densities should remain at, or lower than, the standard specified by the assurance scheme or, when not applicable, at stocking rates specified in the welfare code,’’ Ms Slater says.

One of the biggest challenges seems to be ensuring adequate ventilation, mostly because balcony systems are retro-fitted into an existing house which means that the existing ventilation arrangements might not be suitable for a higher density of pigs.

A higher number of pigs can affect the rate of air turnover and temperature control which means the pigs are more vulnerable to respiratory diseases.

Creating slatted areas in the balcony allows airflow to reach areas underneath and avoid stagnation but installing a good ventilation system creates temperature differences above and below.

Labour requirements might also be higher than for conventional housing.

“Farmers reported that they do require a bit more labour in terms of checking stock, cleaning and folding up the balconies,’’ says Ms Slater.

“This would typically require two people to carry out, and if a folding system is not used, cleaning is harder and more time consuming.’’

A folding system allows for both the ramp and the balcony to be folded away which makes it easier for stock people to clean and to get into hard-to-reach areas.

“The balcony system has proved to be an economic solution for farmers seeking additional pen space,” Ms Slater says. “Based on Dutch costings the cost per square metre of pen space provided is a third of that for a conventional single-level pen in Holland.’’