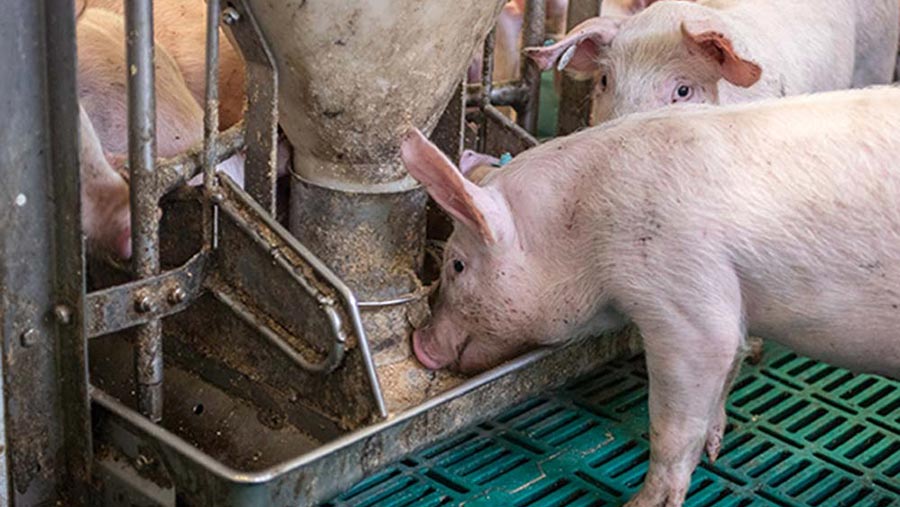 A leading East Yorkshire pig unit has reduced its pig feed costs by £1.90 a head by replacing wheat with rye in its post-weaning rations.

JSR Farms is among a growing number of arable and pig farms that have switched to rye in recent years, benefiting from lower costs of production and good feeding performance.

Rye acreage has more than trebled nationally since 2015. And while much of this is for renewable energy, some pig farms are seeing the benefits that modern ergot-resistant hybrid varieties bring as a pig feed.

Stephen Waite, JSR Farms’ pig and genetics manager, has calculated that the grower and finisher rations are £5/t and £10/t cheaper, respectively, with rye.

He says that, while rye is hard to value in the marketplace, if you work back from cost of production on the arable unit, you find the saving is a genuine one, with second wheats generally about 1t/ha (0.4t/acre) lower than rye.

“We’ve replaced rye with second wheat in the rotation over the past three years,” explains Mr Waite. “It’s not often you get this in farming, but it looks as if rye gives a genuine cost saving due to its lower input costs.

“There was little overall difference in pig performance and how it fed, but the JSR Farms businesses benefit overall due to the economi

How rye is fed

Rye is processed through the farm’s mill-and-mix unit and fed as a dry feed to growing pigs, replacing wheat in the second stage grower and finishing rations.

About half of the farm’s 30,000t of feed is home-milled, explains Mr Waite.

While rye is being fed to sows on some farms, particularly in Denmark and Germany, Mr Waite stresses that the wet feeding system at JSR Farms does not suit a rye-based feed, so it’s only used for growing and finishing pigs.

Post-weaning, all feed is fed ad-lib through wet and dry hoppers, with the rye being mixed with soya and barley.

Rye is introduced at a 30% inclusion rate alongside wheat at the second growing phase when pigs are 50-75kg. This is to transition the pigs from the starter and grower one ration, which is still wheat-based.

At about 75kg, pigs move to the finishing ration, which is 50% rye, until they are finished at about 133kg liveweight. 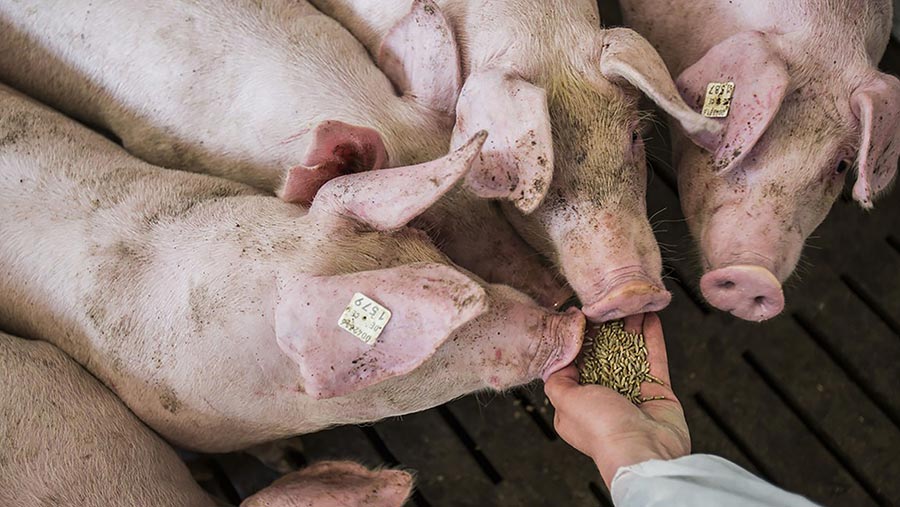 The farm’s strong performance of about 870g daily liveweight gain from weaning to finishing has been maintained, and the feed conversion ratio of about 2.2:1 has remained throughout, since switching from wheat.

After the move to rye, the farm’s nutritionist checked the mineral analysis, with the main change being slightly higher amino acid levels. Rye’s crude protein is about 1-1.2% lower than wheat. 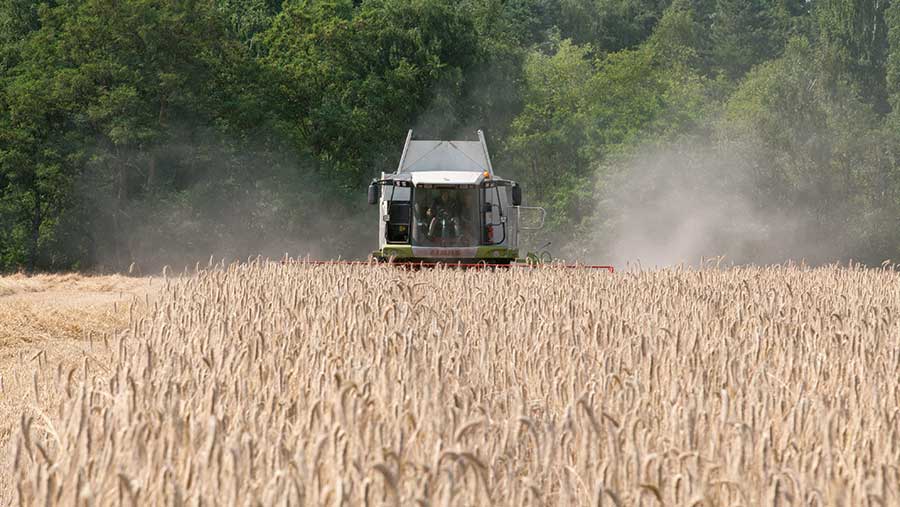 The savings are made from less nitrogen, fewer tractor passes and minimal fungicide.

As it is lower in crude protein, rye leads to lower ammonia emissions because there is less nitrogen in the slurry.

Higher straw yields also mean there is more straw for bedding sows – the weaned pigs are all on slatted systems.

And while the old adage remains that rye should be priced somewhere in between wheat and barley, with JSR Farms being 60% self-sufficient in feed, the main saving is in the cost of production.

Last summer the farm made a margin by selling 3,000t of wheat and buying 3,000t of rye to be used like for like in the pig rations.

“With wheat now over £200/t, many of our customers and pig-producing partners are looking at the work we have done and considering rye as a potential cost saver.” 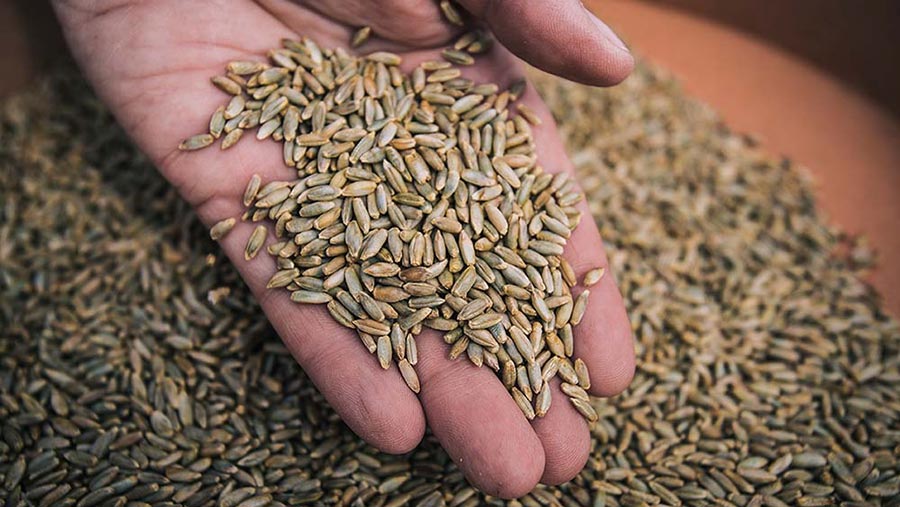 Rye contains high levels of arabinoxylan, which acts as a prebiotic © KWS

Pros and cons of rye

Some of the rye grown by JSR Farms is KWS Edmondo, a hybrid variety with high ergot resistance which is suitable for feeding, milling and anaerobic digestion.

With rye often seen as a low-value crop, Farmers Weekly asked John Burgess of KWS about the crop’s fall backs.

Is rye still a low-yielding crop?

Yields have increased about 45% since the 1980s and the advent of hybrids – and they are up 20% compared with the early 2000s – so they are now matching yields of most second and third cereal options.

Many units can get 8t/ha (3t/acre) with the modern hybrid varieties, and it’s far more drought-tolerant than wheat.

How expensive is the seed?

However, all that and more is made up by a greater straw yield, which, while it takes longer to combine, will often be at least 30% higher than wheat.

Yes and no. The neutral detergent fibre of rye is about 38%, compared with 14% in wheat. Importantly, it has far higher levels of arabinoxylan, which is the non-starch polysaccharide that is converted to butyrate in the hind gut.

As a feed, it creates a sticky glue when fed in a standard wet system, but if it’s fermented first, which some Danish farms are doing, it loses viscosity. This takes 12-24 hours, after which time it can be fed through a liquid system easily.

On a positive note, the arabinoxylan helps raise the energy supply for late-gestation sows when they have lower intakes, helping support colostrum quality and keeping energy levels up so farrowing times don’t become too protracted.

How does it feed to finishing pigs?