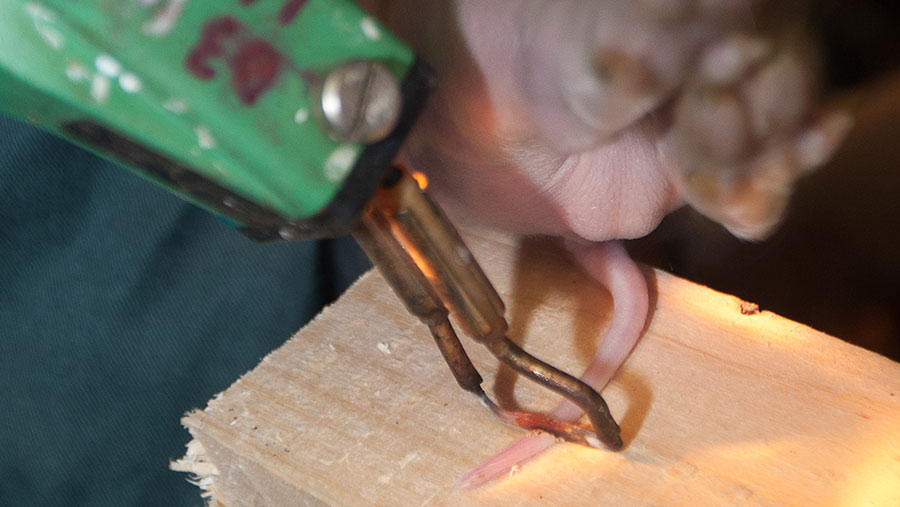 Tail biting in pigs is a welfare issue that causes pain, possible infection and loss of performance. For this reason, although tail docking is not legally permitted in the UK except under certain circumstances, some farmers are faced with no other option than to tail dock as a means of controlling the behaviour.

However, the National Pig Association (NPA) has raised concerns the Animal and Plant Health Agency (Apha) is clamping down on routine tail docking during inspections.

Farmers Weekly spoke to the NPA’s chief executive Zoe Davies and a spokesperson from Apha to find out more.

In summary what are the rules regarding tail docking?

NPA: Routine tail docking is not legally permitted except under certain circumstances. The rules state farmers should look at ways to reduce the likelihood of tail biting such as improving environmental conditions or reducing stocking densities.

If those methods fail, tail docking should only be performed as a last resort on pigs before they are seven days old, or otherwise it must be performed by a vet using an anaesthetic and pain relief.

In 2016, the EU Commission published a document on best practice with a view to the prevention of routine tail docking and the provision of enrichment materials to pigs.

This is effectively what the industry is working towards and the guidance will also be reflected in Defra’s revised Code of Recommendations for the Welfare of Pigs, which is expected to be launched in the coming months.

Are you aware of any farms that have been subject to the stricter inspections?

NPA: We are aware that routine tail docking has been flagged up during a number of cross-compliance inspections in recent months.

One producer has already received a 5% deduction to his BPS payment for this reason and he won’t be the last.

Why is Apha clamping down on tail docking?

NPA: We understand Apha believes the industry is not doing enough to reduce routine tail docking.

We have had some discussion with Apha about the stricter inspections, but there is still a lot we are unclear about and we feel there has been a lack of engagement with industry and failure to prepare pig producers for the changes.

We want Apha to be pragmatic in its approach and understand that there is no one-size-fits-all approach out there that will solve the issue of tail biting.

Apha: There has been no change in the law that governs farm animal welfare, particularly in regards to routine tail docking, which continues to be prohibited.

Paragraph 5 of Schedule 3 of the Mutilations (Permitted Procedures) (England) Regulations 2007 states that:

What consultation has there been regarding increased enforcement relating to tail docking?

NPA: The NPA has set up a tail docking working group consisting of government, industry, vets, farmers and academia to look at how we could work together more closely and develop a joint approach to reduce tail docking in the UK.

This would seek to protect pig welfare, achieve meaningful culture change in the industry, develop a helpful advice and guidance/training package for pig producers and an agreed course of action, as well as identifying areas where we need further support.

Apha: We have recently launched a consultation on a new statutory pig welfare code to provide detailed information on the different factors that can cause tail biting, advice on how to prevent it and guidance on how to avoid the need to dock pigs’ tails.

There is talk that in January stricter inspections will be rolled out more widely. How will this affect farmers?

NPA: We understand farmers will need to demonstrate at inspections that tail docking has been used as a last resort after taking the necessary steps, as described in legislation, to reduce the risk of tail biting.

This includes actions to monitor and improve the pigs’ environment, including ensuring sufficient provision of acceptable environmental enrichment.

We expect inspectors will be looking for data on prevalence of tail biting on the farm and evidence of the steps that have been taken to rectify the problem.

Lack of tail biting on a farm that tail docks pigs will not be good enough evidence; neither will a standard letter from the vet stating the need to dock.

Apha: Pig farmers need to demonstrate at inspections that tail docking has been used as a last resort after taking the necessary steps, as described in the current welfare codes, to reduce the risks of tail biting. This includes actions to improve the pigs’ environment and their management.

We wish to see full compliance and, to aid enforcement, we have gone out to consultation with a new statutory pig welfare code.

This provides detailed information on the different factors which can cause tail biting and will provide advice on how to prevent it and to avoid the need to dock pigs’ tails. We will be publishing the new pig welfare code and our response to the consultation in due course.

Will both indoor and outdoor units be the target of stricter inspections?

NPA: Essentially, yes. However, there seems to be more focus on indoor units and especially those with slatted systems and a common misbelief that just giving pigs more space and straw will solve the problem.

If tail biting is an issue on a farm, what measures should farmers take to reduce it?

NPA: Farmers need to be able to prove they are only tail docking pigs when necessary and not routinely. This means farmers need to be collecting data on tail biting, assessing what risk factors are present on their farm and then implementing methods to try to reduce the risk of biting.

This may include the provision of new and stimulating enrichment, removing known biter pigs, making sure the environment is comfortable for the pigs, ensuring adequate feeder and drinker space, providing good-quality water and in some cases by reducing the stocking density.

Farmers must record the actions they have taken so they can demonstrate their effectiveness or provide further evidence of the need to dock.

Tail biting is a welfare issue that causes pain, possible infection and loss of performance. If measures have been tried to reduce tail biting and there are no other options, then tail docking in a batch may be required.

Our concern is that farmers who tail dock due to tail biting problems will be panicked into not tail docking and create a much worse situation.

We are quite clear that no farmer should start any trial without first consulting their vet, developing a plan and most importantly, having a contingency plan in place for what to do should the worst happen and an outbreak start.

The AHDB has created a risk assessment tool called the webHAT that producers could use to identify the tail biting risk factors on their farm and then generate an action plan, in conjunction with their vet, to minimise risk.

Apha:  Every farm is different and the circumstances behind tail biting outbreaks is specific to each case.

As tail biting is a multifactorial problem, it is of paramount importance to address the underlying causes in order to prevent those outbreaks.