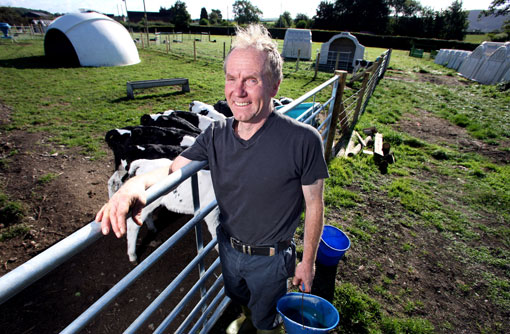 As a follow-up from Farmers Weekly’s Youngstock: Stop the Loss campaign, a group of specialist advisors teamed up to form the Pneumonia Hit Squad and visited three producers to troubleshoot their calf-rearing systems.

The Hit Squad’s recommendations prove you don’t have to have a big, new set-up to get the best from your calves – it’s about making the most of the buildings you have. Aly Balsom reports from David Evans’ Boycott Farm in Yockleton, Shropshire.

How David Evans’ rearing system is set up

One of the main problems with a new build is that most farmers want it for multiple uses, which means the roof can be too high for young calves, explained Mr Williams.“The current plan for a 16ft calf shed is too high. If you have a 25% incline, this will mean the ridge is at 18-20ft – baby calves will be unable to produce enough heat to drive ventilation in this big space.”

“If you want to build a big shed, you could fill up space with straw bales to reduce the shed volume or partition off to keep different air spaces. For young calves, a 10-12ft roof height is ideal.”

The Hit Squad suggested “stepping” the height of the roof along the new shed, so half was at 12ft and half at 14ft.

“Older calves, of about 18 months, will be able to cope better in a 14-16ft high building as they will be more capable of ventilating the space,” Mr Williams explained.

Leaving one side of the shed open with gail breakers that pulled upwards, instead of downwards, would also aid ventilation, while protecting stock at calf level.

Mr Williams also said that, ideally, a calf shed should be sited up wind of the adult herd to reduce the chance of disease transmission.

Creating hardcore pads and rotating calves between fields will help to limit disease spread and prevent the ground from getting too wet, said Mr Potter.

“You could separate the field into four areas and create two hardcore bases in each – one for housing and one for milk feeding.”

Mr Williams said the system provided the flexibility to use hutches or igloos depending on how many calves were coming through the system. Two fields could then be used, and two rested, at the same time.

However, Mr Potter said it was important to monitor intakes, particular in the winter months, to ensure growth rates were not hit by feeding outside.

“You could continue to milk-feed calves outside in the igloos and then wean them into the new shed.

“By using the outside space for milk calves and the new building for older calves, it also means there’s less of an age span in the shed.”

1. Think about the stocking rate of baby calves – don’t put up buildings that are too big and too high.

2. Buildings need both an inlet and outlet

4. Ideally buildings should be built for a specific purpose

5. Roofing material will effect how a building is ventilated

A building containing animals on a still day ventilates by a phenomenom known as the “stack effect”. The animals drive this with the heat they produce.

Both inlets and outlets are needed to allow air to be pushed up and out of the building and new fresh air to be drawn in. It’s essential you have both. The most common finding in buildings is a lack of high-level outlet.

See the Hit Squad in action on farm in this video, and read about our other case studies at Ridgend Farm, Worcestershire, and Combe Farm in Castle Combe, Wiltshire.

Read our other case studies at Ridgend Farm, Worcestershire, and Combe Farm in Castle Combe, Wiltshire.