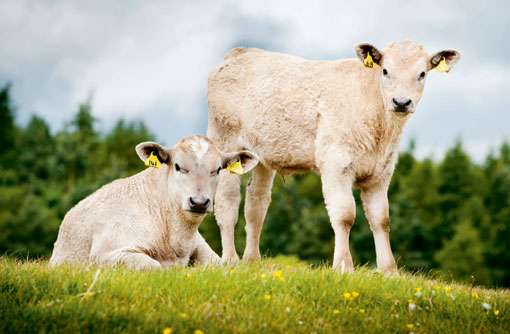 Post-calving management is critical to the success of rearing calves on any farm and getting cows back in calf. And a good routine has seen Focus Farmer Simon Frost achieve calving periods of just 14 weeks – a figure that compares favourably with the EBLEX average of 20 weeks and 19 weeks for the top third of producers.

Traditionally, Charolais bulls have run with replacement heifers from 1 May and with the cows from 21 May. But this year’s bulling dates have been put back by three weeks as a result to achieve a mid-March calving in 2012. Bulls this year will also be rotated every three weeks around the groups.

The option to semen test using electro-ejaculation techniques costing about £100 a bull is now under discussion. However, this procedure will give a fertility reading of the bull’s semen only on the day and doesn’t evaluate the bull’s libido or its physical capability to serve a cow. 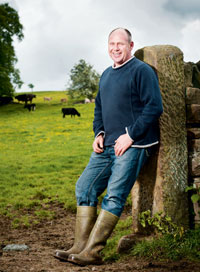 Mr Frost (pictured left) believes all bulls sold at breed society sales should have been semen tested. “It would help the purchaser and reduce bull fertility insurance premiums for the vendor,” says Mr Frost.

All bulls are also foot trimmed about three months before starting work to avoid possible effects on fertility, adds Harper Adams university lecturer Simon Marsh. “If feet are trimmed about two months before bulls are turned out, it can cause some initial curative lameness, which can influence spermatogenesis. Sperm takes 50-60 days so it can adversely affect fertility.”

However, if cows are not in the correct condition for bulling it can lead to poor conception rates. Cows and calves at Hopping Farm are turned out – as soon as weather and ground conditions allow – on to minimal grazing but are fed silage.

“If we turned them on to good-quality grazing, say sward heights of 8-10cm for the first four to six weeks, we’d get too much milk from the Limousin x Holstein-Friesian cows and the calves would struggle to take it,” says Mr Frost.

Grazing quality is gradually improved to provide pasture at a sward height of 8-10cm to increase milk yield and improve cow condition in readiness for bulling. “Having cows on a rising plane of nutrition up to and during the bulling period to achieve a condition score 2.25-plus is a key factor in optimising fertility,” says Mr Frost.

Cows have free access to high magnesium molassed mineral buckets – with high copper – and are given a bolus supplying copper, selenium and cobalt. The high molybdenum levels in the soil at Hopping Farm lock up copper and can create severe copper deficiency.

Mr Frost also pays close attention to calf management post calving, with the average time from birth to a calf taking its first intake of colostrum just 30 minutes, which he believes is crucial for calf health.

Power washing and disinfecting the calving boxes every three weeks has also improved calf health and reduced antibiotic use – especially with calves born late in the calving period.

“But we do have a problem with coccidiosis,” says Mr Frost. “Calves start to produce a dark scour that can include blood if not treated quickly. Calves respond well to a coccidiostat and, provided they are treated on time, their subsequent performance isn’t affected.”

• Ensure an early and adequate intake of colostrum

• Rising cow condition before and during bulling

• Offer grass sward heights at 8-10cm during the bulling period

Among this year’s bulls was an outstanding calf sired by Balthayock Clifford – a bull with a top 1% Terminal Index and an EBV for growth of +61kg at 400 days. The calf was slaughtered at exactly 365 days at a carcass weight of 471kg and graded E3. The recorded carcass gain was a phenomenal 1.22kg a day.

The bull had a live weight at slaughter of 788kg and a killing-out percentage of 59.8% – that’s 2.04kg DLWG from birth to slaughter, believed to be a world record.

Simon Marsh says: “Considering the calf wouldn’t exceed a growth rate above 1kg a day in its first month of life, it must have recorded a DLWG of nearly 3kg a day at its peak growth stage. We believe the daily carcass gain from birth to slaughter of 1.22kg is a world record for a commercially finished bull.”

And by using top 1% Charolais bulls with high EBVs for growth and muscle – underpinned by a management system that ensures close attention is paid to herd health and nutrition – calves consistently achieve high levels of daily carcass gain.

“The bulls we use are in the top 1% based on terminal indexes and are known as curve benders. They are easy calving and have high growth rates,” says Mr Frost.

His calves are sold at weaning in October to Alan and John Dore, of Glapwell near Chesterfield, and intensively finished. By mid-May this year, just over half of the bulls supplied to the Dores had been slaughtered.

The first 30 Charolais-sired bulls finished achieved a mean carcass weight of 417.4kg at 394 days, which is just less than 13 months old (see below) – that’s a carcass gain from birth to slaughter of 1kg a day.

Simon Marsh, senior lecturer at Harper Adams University, says: “The bulls killed out – gut full – at 59.8%, which equates to a live slaughter weight of 698kg and a DLWG from birth of 1.67kg. If they’d have been weighed gut empty in a market situation or abattoir, the killing-out percentage would be approximately 62%.”

Mr Marsh continues: “39% of the bulls recording E grades for conformation with the remainder grading U+. That’s an outstanding achievement.”

Full details and averages of all the bulls and the heifers – including feed intakes and feed conversion ratios – will be given in a future article.

Note: Carcass birth weight was assumed to be 24kg

To combat high cereal prices, John and Alan Dore – who finish the cattle on their farm at Glapwell, near Chesterfield – have slaughtered bulls earlier and at lighter weights this year and ahead of any possible deterioration in feed conversion ratio.

“One of the leading UK abattoirs pays on all weight up to 450kg for E and U grades, but deducts 10p/kg for any additional weight. The same abattoir doesn’t pay for any weight more than 450kg if the carcass is an R grade or below.

“It’s a penalty driven purely by the size of the plastic tray used to pack a sirloin steak for the supermarket trade because the steak must be ¾-1in thick. Surely something needs to be done to remove such an unfair penalty on heavy-weight carcasses.”