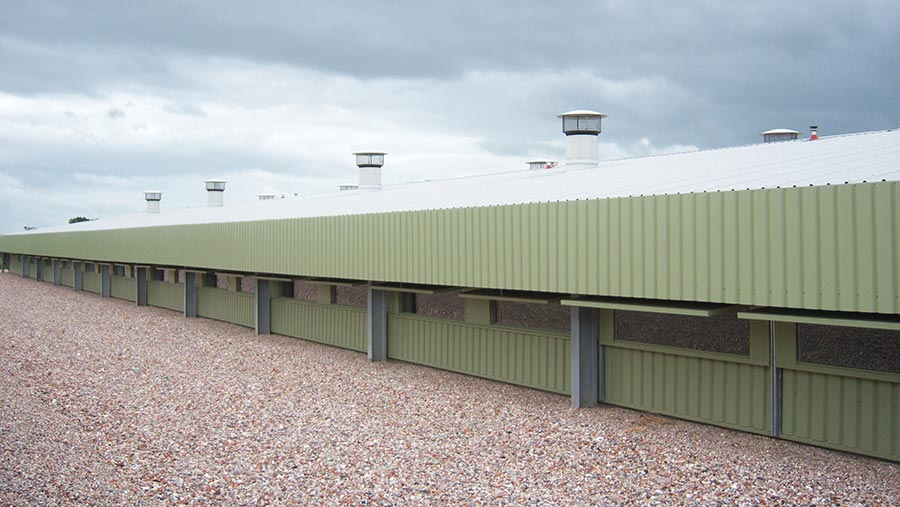 Since 1 October 2020, all buildings that house poultry have had to fit windows to meet Red Tractor standards.

For many farmers, this means retrofitting units in order to comply.

But all sheds are not created equal, and installing windows incorrectly, or using the wrong materials, could mean a lot of money spent and a shed that is still non-compliant.

See also: How to manage poultry housing environments in winter

We asked Morspan’s Donald Gillespie for guidance on the rules and how farmers can avoid falling foul of four common mistakes when upgrading.

From 1 October 2020, all poultry shed windows should:

Where poultry sheds already have windows equal to 1% of the floor area, farmers have until 1 October 2023 to upgrade, and windows can be opaque or frosted if natural light can penetrate.

“Whether the windows are clear or opaque is normally driven by the processor – some prefer opaque windows.

“The birds are still getting natural daylight but with less solar intensity,” says Mr Gillespie.

“For a while, people were putting in windows equal to 1% or 1.5% of the floor area and now everyone is upgrading to 3% – but one of the larger processors is considering even bigger areas of 4-4.5%.”

Evenly distributed windows are meant to ensure an even spread of light, though Red Tractor recognises this isn’t always possible.

For example, there are often difficulties in older houses when it comes to the location of retrofitted windows.

Mr Gillespie urges producers to spend time getting it right.

“As the percentage area required increases, it makes it difficult to fit windows into the side wall – as the house gets wider, we need to make the windows wider or taller.”

The key to getting placement right is a letterbox design. This is where continuous windows are fitted all along both sides, which gives uniformity of light and lux within the house.

If the light is not uniform, the bird spread will be uneven, which can lead to problems.

When retrofitted windows have been poorly sealed there can be issues with draughts, which will compromise bird performance.

“When they cut the windows out, maintaining the structural integrity and installing the new window so it’s airtight is key, says Mr Gillespie.

Insulated shutters/baffles on the outside are also critical to the success of the install.

With some retrofits, a simple non-insulated blind or curtain might be used.

While that complies, it is not 100% lightproof and there is no insulation value, so the windows are a lot colder than they would be on a modern house.

Both glass and polycarbonate are acceptable under Red Tractor standards, but the windows must be double-glazed and, if using glass, it must be toughened on the inside.

When using polycarbonate, dust and dead insects can build up between the sheets when they aren’t sealed together, so it’s important to keep them clean.

What are the costs?

That figure comprises £13,000 for the windows in a uPVC frame and the rest for the shutters and rack and pinion opening system.

If the double-glazed, toughened glass was replaced by 27mm polycarbonate in a uPVC frame, that would save about 33%.

The windows and blinds can be fitted during turnaround for ease.

“A lot of companies will fit them in the period between flocks in around three or four days, so the producer isn’t losing any time growing chickens,” Mr Gillespie says.