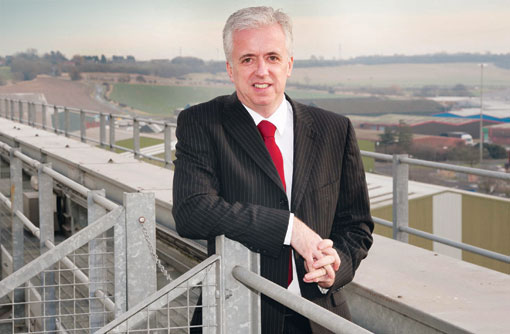 Simon Heath has worked for ABN – part of AB Agri – for more than 20 years, rising to become sales and marketing director for its monogastric and ruminant feeds division. Philip Clarke went to meet him.

Tell us a bit about yourself – how did you get into ABN and why have you stayed so long?

I was “hatched and reared” in Cornwall into a farming family, though my father was actually an agricultural engineer. I did a three-year sandwich course at Bicton College and then joined J Bibby Agriculture in 1989 on their graduate sales programme. Bibby was acquired by AB Agri in 1994.

Since then I have had 14 different roles with ABN and worked on three different continents, including a three-year spell in Chicago. AB Agri is very much a people company. We like to give our staff a fair degree of autonomy. People come here and they stay here.

And what is ABN’s main role?

ABN supplies compound feed to the pig and poultry sectors. We have 10 mills, from Scotland to Devon, making us one of the biggest feed suppliers in the country. Nine mills are dual-species, though one – at Flixborough in Lincolnshire – specialises in poultry. We produce feed for broilers, layers, ducks, turkeys, breeders and game birds.

How has ABN changed in your time in senior management?

It has grown significantly over the past few years. Although the pig market was in decline in the early 2000s, largely driven by the foot-and-mouth outbreak, poultry was expanding and we wanted to be part of that growth. Poultry feed now accounts for over half of ABN’s business. We supply most of the major processors, but also deal with small independents. It is not our style just to trade with the corporates.

What is the ABN’s business philosophy?

To be more than just a feed supplier. Yes, selling feed is the foundation, but we also provide advice, help customers manage risk, share our knowledge of the markets with customers and help them find points of differentiation. There is no one-size-fits-all approach. It’s more of a bespoke offering. We also have a team culture. People don’t talk about “my customer” – it’s all about “our” customers.

We see ourselves as partners in the supply chain and that means forging strong links. One example of this is the work we have done in promoting the Red Tractor both externally, including it with our branding at shows and across our fleet of lorries, and internally, explaining to our staff what it means. A sustainable livestock industry helps make us sustainable too.

Tell me more about your poultry marketing. It seems a bit incongruous within a mega feed company.

Sullivan Poultry is based in Yorkshire and produces about 25m birds a year with contract growers. A lot of this production is for the wholesale trade and for ethnic markets. It is a small, integrated supply chain, accounting for just over 3% of the UK’s fresh chicken market. We do not use the business for feed trials, but it does give us a good window on the live poultry sector, acting as a temperature gauge.

How are the grain markets looking?

Prices were on a downward spiral at the back end of 2011, following ample harvests in the north and with global economic uncertainty. Weather conditions in the southern hemisphere were also near-perfect. But then the market strengthened at the start of the year. Weather patterns were less than perfect and speculators were short, which led to a price spike. The market has settled a bit since then, but there is a lot of uncertainty. Any major weather event around the world could push up prices. And currency will also play a big part this year. What is certain is that volatility will remain.

And how can poultry farmers deal with this volatility?

We use various tools to try to iron out some of the fluctuations, and we are always here to give our customers a view. If we can understand their exposure to risk, it helps us come up with bespoke solutions – for example, maximum price contracts. We also have risk management tools which customers can access, so they can play out “what if” scenarios in relation to the impact of feed prices on their bottom lines. And we offer a daily text service about the raw material markets.

Most supermarkets are continuing to demand GM-free soya in poultry rations. How much is it costing, and do you see any sign of movement in the policy?

We are currently paying a £43/t premium for non-GM soya, though it was even higher last year. The risk of contamination gets higher as the supply of non-GM gets less and less as a proportion of the global soya market. The industry is continually challenging the supermarkets on this, but they seem determined to stick with their policy. We do supply GM poultry feed to some producers – for example those supplying chicken to the wholesale market.

And what about Processed Animal Protein?

We support the science behind it, particularly in the sustainability and environmental context. But it was interesting at last year’s Pig and Poultry LIVE event that, while consumers were OK with GM, they were very unhappy with the idea of PAP. Even if it is readmitted, it will not necessarily mean cheaper feed.

The Food Standards Agency refuses to recommend PAP because it doubts the feed industry’s ability to achieve species segregation.

That’s not really the problem – we could segregate so that poultry rations only contained pig protein, and vice-versa, with a reasonable tolerance. The real issue is that the industry does not yet have a fully-developed testing capability to demonstrate this.

How do you see the medium term outlook for the UK poultry sector?

For boiler producers there are some very positive messages, with growing demand for chicken. But there are some headwinds. Retailers are constantly fighting for footfall and putting pressure on prices. Charging £5 for a chicken is not sustainable. Their demanding specifications can also burden the industry with cost. And the euro/sterling exchange rate may also encourage cheaper imports.

For egg producers, we wait to see what the outcome is with regards imports of illegal eggs from Europe. Our parent, ABF, is very supportive of efforts to persuade people to buy British only.

Why do you partner the Pig and Poultry Fair?

At ABN we take our role in the food supply chain seriously. We know that the consumer drives change and that the pressures coming down from retailers present challenges.

In partnering the Pig and Poultry Fair we have a platform to discuss these challenges and lead the debate on how we meet them, and what ABN can do to support businesses. It also provides us with a platform to communicate how our offering to customers is changing and what new products and services we have developed.

We also want to play our part in encouraging companies to source more British produce and see this event as a key opportunity to raise awareness among the rest of the supply chain and key influencers that work along it.

We’re also keen to encourage innovation in the pig and poultry sectors, so are expanding our Innovation Award.

What else do you do when you’re not working?

Any spare time is spent with my wife and four children at Market Deeping in Lincolnshire. Weekends are typically spent on the touchline of some rugby or football pitch with the other parents.

AB Agri began life back in 1985 as Trident Feeds, which was established to market the co-products from the British Sugar factories.

In 1991, British Sugar, along with Trident Feeds was acquired by Associated British Foods, which includes such household names as Twinings, Primark and Allied Bakeries.

In 1994, ABN was created and continued on the acquisition and joint venture trail, setting up Welsh Feed Producers in 1997 and taking over a number of Dalgety mills when that company quit the feed market in 1999.

In 1996, the business formed its first joint venture feed business in China and by 1998 it had become the fifth largest feed manufacturer in that country.

A joint venture was started with Cargill in 2005, setting up Frontier which now handles about 25% of the UK grain market. And 2006 saw the launch of AB Vista, the animal feed ingredients business, specialising in enzymes.

In 2007, the group was re-branded as AB Agri (Associated British Agriculture).

Today, the AB Agri group has expanded to touch on all points of the food supply chain. Its capabilities have expanded from feed to include ingredients, agronomy, carbon modelling, biodiversity management and services.

ABN is the industry partner to the Pig and Poultry Fair 2012, which takes place at Stoneleigh Park in Warwickshire on 15 and 16 May and is run by the Royal Agricultural Society of England (RASE).

The event is free-to-enter and includes a major trade exhibition with more than 280 trade stands and conference programme, as well as a series of practical workshops. It is a great place to meet friends, network and do business. For more information visit the Fair website or phone 0247 685 8284