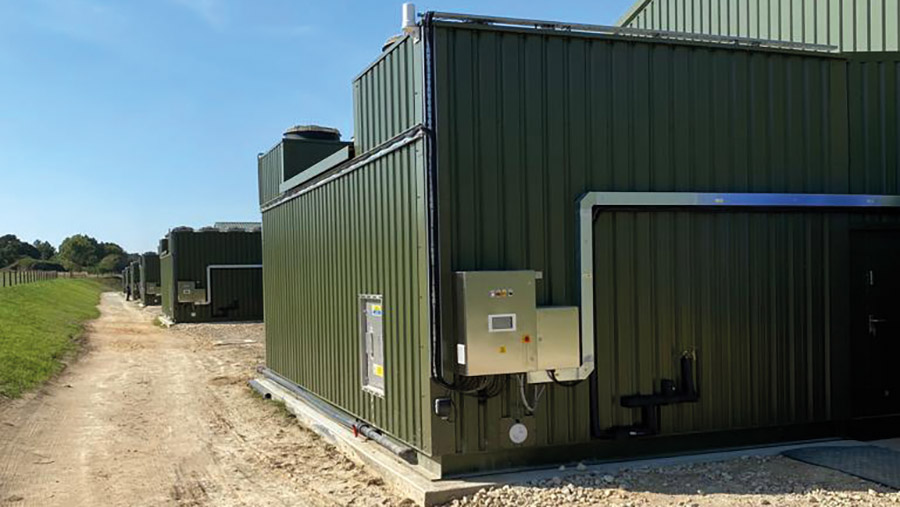 Agriculture accounts for 88% of the UK’s ammonia emissions, with the poultry sector responsible for 15% of the total, according to a report by Adas.

High ammonia emissions can cause damage to human cardiovascular and respiratory systems, particularly when combined with other pollutants such as diesel fumes.

Terrestrial and aquatic ecosystems are also affected via excess nitrogen deposition. About 96% of nitrogen-sensitive habitats in England receive more N than they can cope with.

This causes damage to biodiversity, plant species and ecosystems, as well as eutrophication of waterways – the build-up of nutrients that can lead to algal blooms.

Reducing ammonia emissions is, therefore, a key environmental target for both the sector and the government.

What are the reduction targets?

There are now global and national commitments to reduce ammonia emissions, with the UK government’s Clean Air Strategy aiming for an 8% reduction by 2020 and 16% by 2030, compared with 2005 levels.

But this has led to policy and environmental permit regulations that can hamper poultry diversification or the expansion of an existing unit.

What are the solutions?

Ventilation, litter and manure management are key to containing ammonia levels within the poultry shed.

Matthew Evans, technical director at IPT Technology, explains that ammonia is a soluble, nitrogen-containing gas and is a component of urea which is excreted in livestock faeces.

When manure is exposed to air and moisture, the ammonia is released.

Poultry systems can produce a lot of manure and high levels of ammonia.

To avoid high levels of ammonia being emitted from the shed, the gas needs to be captured and treated – which is relatively easy, Mr Evans says.

“Ammonia attracts itself to water readily. In basic terms you can strip ammonia out of the air by giving it a wash – and that is effectively what an ammonia scrubber does.”

The difficulty surrounds how much air can realistically be treated.

In any poultry system a lot of air movement is required to keep the shed environment and birds healthy – but the economics have to be considered.

Modular options use acid to modulate the water’s pH, which Mr Evans suggests is the most practical and economic option.

IPT’s VentMax system is able to process between 5,000 and 120,000cu m of air an hour, and energy peaks at 16kWh when running at full capacity.

There are other bespoke options which, although effective, will be significantly more expensive and complicated to install.

IPT datasets put the average ammonia emissions from a 50,000-bird broiler unit at 50ppm (parts per million) an hour – that equates to 1.95t/year, depending on the flock cycle.

With an average 5.5pH and processing up to 120,000cu m/hour of air, the modular system can reduce emissions to 2-4ppm/hour.

The aim is to scrub 90% of air 70% of the time, which also reduces odour by lowering dust emissions.

The resulting waste product from ammonia scrubbers – a soluble ammonia effluent – can be used as a liquid fertiliser, providing a readily available nitrogen source.

Modules can be easily installed, with the basic needs for a new build being a 1x8m opening, normally in the rear of the shed, and a concrete slab for the scrubber to sit on.

A corridor around the scrubber allows maintenance access, so operators don’t have to enter the bird shed, thereby improving biosecurity.

A retrofit can be either a ducted system or an opening created in the shed, and requires the same preparation as a new build.

“It can all be done within a flock turnaround period if everything is prepared,” says Mr Evans.

Commissioning takes about a week and requires connection into the climate-control system.

The main ventilation system treats the scrubber as a set of fans – so an electrical contractor will need to be involved for set-up.

Vent-Max modular ammonia scrubbers cost about £65,000/unit plus installation. Depending on emissions levels, two units to a shed may be required.

Running costs average £4,500-£5,000 a unit on a broiler site. This can be partly offset against the cost of the ventilation system as the scrubbers work as part of the overall ventilation strategy.

A scrubber may not always be the best option – particularly when it comes to retrofitting, says John Gill, also at IPT Technology.

Producers need to look at their total ammonia emissions for the farm and assess their current infrastructure.

“Poor ventilation is often a cause of ammonia, dust and odour issues,” he says. “Poorly ventilated sheds will result in wet litter, which allows more ammonia to be released into the air.”

Modern ventilation in a retrofit situation can potentially cure those problems without the need for a scrubber.

“When marginal ammonia reduction is required, look first to see if there are other things you can review and change, like feed, bedding, higher air stacks, greater air velocity, and better heating and cooling,” he says.

“In those situations a scrubber should be seen as a last resort – for it to be commercially viable you need to make sure the core systems are solid.”

Of course, there are other mitigation options when looking at the whole-farm perspective, such as reducing other livestock and planting trees, for example.

But where ammonia emissions from a unit need to be dramatically reduced, a scrubber may be the only option.

In a shed that produces 3,500kg/year of ammonia and has a tolerance of 350kg, no amount of change to the ventilation or management is going to be able to reduce it to those levels.

UK environmental permitting requires all poultry units that have more than 40,000 birds to obtain and comply with permit conditions set out by government.

These look at total emissions from the site as well as the contribution from a new or expanded unit. “They also look at existing background levels, proximity to sites of special scientific interest, nitrogen-sensitive areas and residential areas,” says Mr Gill.

“In Wales, where there are a lot of sensitive areas and regulations are very tight, intensive farms aren’t able to obtain an environmental permit and planning permission without reducing their ammonia emissions using Natural Resources Wales (NRW) recognised techniques – so a solution is needed.

“In the case of ammonia scrubbers, NRW recognises a reduction of up to 99% in channelled air emissions.”

And investments in such technology may be rewarded. “There is a lot of talk from supermarkets, processors and hatcheries that there will be incentives put in place if the farmer installs a scrubber,” he adds.

“There is a push because it’s been put on the farmer to do this – there could be a premium for meat, for example, because it has an environmental benefit – it could be seen as another green tick in the reduction of ammonia emissions.

“It’s important to stress that no incentives are set in stone just yet – but the talks are promising.”