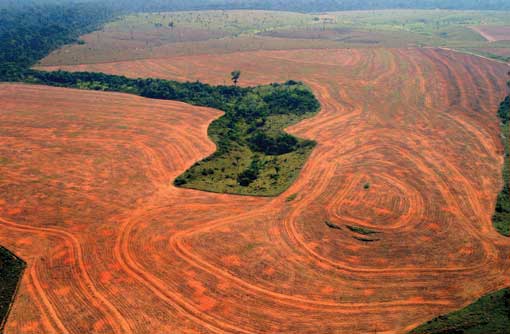 As questions are raised about the long-term use of soya meal in poultry rations, independent consultant Zoe Kay considers the alternatives.

There is a movement within the poultry industry to reduce its reliance on soya meal as a protein source, and replace it with more sustainable alternatives.

As well as the obvious “food miles” involved in shipping soya from South America, its cultivation is seen as a major contributor to the destruction of the Amazon rainforest.

On top of this, prices continue to rise and supply can be unreliable, particularly in the case of non-GM soya beans.

“At the moment there aren’t any viable options to replace a significant quantity of soya,” says John Round from feed compounder ABN. “Full fat rapeseed, as well as rapeseed/pea/bean mixtures, can be used in greater quantities, but you are only talking about replacing a small proportion of the soya in the diet.

“If meat and bone meal was allowed back into poultry feed, it would make a big difference,” he adds. “Soya usage increased significantly following the MBM ban, but it is not clear when or if the EU will allow its reinstatement in poultry feed.”

Over the last decade there has been significant development of the genotypes of the birds being used in broiler production. Their increased performance may require more highly specified diets in terms of protein/amino acid levels to be fed for their potential to be realised.

Organic producers have been hit particularly hard in terms of soya prices and availability. They need to buy traceable organic diets at a price that is economic, often relying heavily on imported ingredients – a situation that is at odds with the organic ethos.

The first aims to produce sunflower seed for feed rather than as an oil crop, from which the meal is a by-product. Traditionally, sunflowers are grown in sunnier climes, where the crop is harvested in late summer. This is when the oil levels in the plant are highest.

However, if the plants are harvested earlier, not so much sunshine is needed – which is lucky for the UK. At this time the crop will be higher in protein, increasing its value as an ingredient in poultry feed.

Capestone Organic Poultry in Pembrokeshire is carrying out a “look-see” trial, growing sunflowers and feeding the resulting crop to their table birds. Sustainability is important to them as organic producers, but also to the retailers they supply. Producing some of their own feed will also bring advantages in terms of traceability and resilience to market fluctuations.

The second OCW project is looking at peas and beans for use in poultry diets. Currently, there are limits to their inclusion due to the presence of anti-nutritional factors (ANFs), mainly in the fibrous hulls. If the hulls could be removed, it would increase the protein value and reduce ANF levels.

De-hulling grains such as spelt, is common.The machinery simply needs to be recalibrated to de-hull peas, beans, lupins or sunflower seeds. OCW has been running a project to look at the viability of this technology for organic poultry farmers.

While OSR is difficult to grow organically, increasing inclusion levels in poultry diets for the conventional market may be an option. ADAS is currently working on a project sponsored by Sainsbury’s looking at partially replacing soya with OSR in diets for broilers and laying hens. Parameters including bird performance and welfare will be investigated.

“The commercial reality is that, when formulating diets on an optimal cost basis, soya is the most attractive material,” says Steve Pritchard from Premier Nutrition, who is involved with the ADAS project.

“However, a small change in the price of OSR products would make its inclusion more viable. What we need to find out is how much we can use, in terms of bird health and performance.”

One problem is that OSR meal is a relatively low energy ingredient, which therefore requires additional oil in the diet, potentially having a negative effect on pellet quality.

Dried distillers grains with solubles are also readily available for use in animal feed from the biofuel industry. Commercially, just a small amount is included in layer rations, despite the significant opportunity for this mid-level (35-37%) protein feed. A LINK project run by ADAS is currently looking at exactly how much soya can be substituted with DDGS in diets for different species.

When UK bioethanol plants are up and running, they will use 2-3m tonnes of wheat a year. One-third comes back as DDGS, which has to go somewhere, so it is in their interest to price the product competitively.

One problem, however, is that while protein digestibility is very good for soya, neither OSR nor DDGS can match it, explains Mr Prtichard. But this may be where proteases have a role, to improve the nutritional value of protein feed ingredients.

In addition, this would help prevent problems like poor litter quality, hock burn and pododermatitis, which the industry is already striving to reduce.

The consensus seems to be that there isn’t a “quick fix” to replacing soya. Several strategies will be needed to address this complex issue. So if the options already discussed are not the whole answer, what are the other possibilities?

Whilst white lupins are already grown for forage in the UK, those suitable for poultry aren’t produced commercially. Yet blue and yellow lupins have a nutritional profile comparable to soya, with high protein and oil levels greater than peas. The added benefit for farmers is that they fix nitrogen, reducing fertiliser requirements.

IBERS at Aberystwyth University is researching the possibility of lupins providing a home-grown protein source for poultry, livestock and aquaculture. Ten industrial partners, with co-funding by the Technology Strategy Board, support the project, which involves two research institutes.

Results from initial studies with laying hens are promising and a larger scale trial is under way with Birchgrove Eggs in Ceredigion, where Bovans Browns have been fed on yellow lupins at 50% soya replacement since week 16, giving approximately 16.5% protein. At 21 weeks the birds were achieving 65% lay.

The project also includes agronomy and variety trials, looking at suitable growing conditions and strategies for lupins in the UK.

There are also several companies looking at the use of insect meal in poultry diets, particularly fly larvae. These are grown on organic matter, before harvesting and grinding into meal. Insect meal has a high (37-49%) protein value and is highly digestible.

Products are not yet commercially available, but are well into development. The environmental benefit of this technology is that poultry waste could be used as a food source for the parent flies.

To quote Stephen Edge from ADAS, “If the soya supply was turned off tomorrow then we would not have a broiler industry.” We need a plan B and we need to test it, so that if this happened we would still have a viable poultry industry in the UK.

In all the projects, supply and demand need to be investigated carefully. While small-scale production of protein crops may be suitable for niche producers, to supply the wider poultry market, a significant acreage needs to be grown.

For the large arable companies, the price of the alternatives need to be right in order for them to consider diverting land away from wheat or oilseed rape. Perhaps arable and poultry producers need to develop direct relationships to improve the economic viability of home-grown crops.

“It will be a long time before organic producers can remove soya entirely from their diets, but the less they rely upon it the better,” says Tony Little from OCW. Reducing the reliance on soya will in turn help to reduce the vulnerability of producers to fluctuating markets.

To completely remove soya from poultry diets is a long-term challenge. However, there are options open to producers to replace some of the soya they use. Over the next year or so more information will be available on successful formulation with rapemeal, sunflower and DDGS.

New technologies will also play a role in the future despite many of the alternatives not being economically viable at present.

If soya prices continue to rise, as predicted by increased demands from the growing economies of China and India, then they will begin to look more attractive. This is not a problem that is going to go away.

Zoe Kay is an independent consultant, offering technical services to the animal health and nutrition industries.