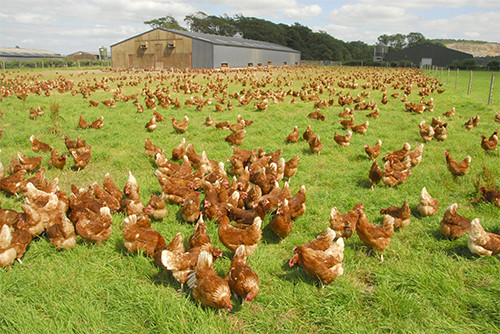 Analysis by ADAS shows that retailers generally wish to retain a value option and the consensus among supermarkets was that barn would better meet their needs rather than two-tiers of free range production.

Retailers – Aldi, Asda, Iceland, Lidl, Morrison’s and Tesco – are committed to phasing out eggs from enriched cages by 2025, joining the Co-Operative, Marks and Spencer, Sainsbury’s and Waitrose, who already have cage-free policies.

Mr Gittins said retailers had told him that their reasons for making the non-cage commitment last year were due to pressure from NGOs and the general public and that the timing was now right to do so, given time since making their previous investment in colony cage.

Mixed views on the future of the free range sector

Numbers of eggs from enriched cages are continuing to fall at retail, now between 30-40% of all shell eggs sold, but Mr Gittins said forecasts of future changes were mixed. Some believed there would be further free-range growth with the market taking 80% by 2025. Others said there would be little current or future growth in the free range sector. Much depended on the UK’s future economic situation and, in particular, Brexit.

How many poultry sheds would it take for a 10% expansion of free range?

All the retailers analysed said the 2025 deadline would not be brought forward as there was recognition that some egg producers are still repaying finance for enriched cages, and that talks with suppliers to determine mutually acceptable timescales and approach would take time.

Retailers generally favoured the barn system, although Mr Gittins said there was recognition that consumer awareness was low and the current market – around 2% – was small. Other issues that needed to be addressed included system longevity and competitive pricing with a clear gap between barn and free range.

However, they generally – albeit not wholly – predicted some free-range growth which would be customer-led and not directly linked to retailers’ purchasing policy.

Egg is often a minor ingredient in many products

Retailers had also made it clear that their non-cage commitment was for shell eggs and not egg products although there was growing focus in this area.

“There are problems here due to the product range, the number of suppliers involved and egg is often a very minor ingredient in many products,” he told delegates.

Robert Gooch, Bfrepa CEO, said the research showed some consumers still wanted a value egg and that it was important the free-range sector understood there may not be a substantial expansion in the sector over the next 8 years.

A recent snapshot of Bfrepa members had shown they were expecting to see a 10% growth in the market over the next year.

Mr Gooch said he was relaxed with the ADAS report findings, saying it was important free-range eggs continued to be seen as a premium product.