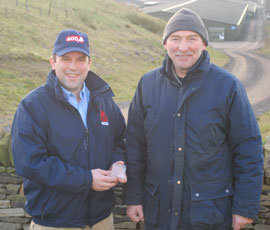 Any UK broiler farmer who reaches a European Production Efficiency Factor (EPEF) of 400 or more with their Ross flock – past or present – is eligible for membership of the club.

“Since 2009, 11 flocks have recorded an EPEF of 400 or higher,” said technical service manager, Ian Dowsland. “However I am confident that more and more farmers across the UK will become members of the 400 Club in the coming months. Achieving an EPEF of 400 is something to be celebrated as less than 1% of broiler flocks globally reach this mark.”

EPEF is the equation used to measure the technical performance of a flock and takes in to consideration the feed conversion ration (FCR), livability (life expectancy), live weight and age of the bird.

According to regional technical and commercial manager. Alan Thomson, there is no magic formula for success. “It’s not just large flocks, or flocks in new buildings,” he said. “There has been a mix. It really comes down to attention to detail, getting the chicks off to a good start, keeping the environment clear, spending time with the birds.”

Mr Thomson added that launching the Ross 400 club was intended to acknowledge the hard work and dedication that goes into producing a successful broiler flock. “Reaching this milestone is a truly outstanding result which goes above and beyond our own performance objectives and deserves recognition.”

David Speller, 2009 Farmers Weekly Awards Poultry Farmer of the Year winner and independent broiler grower is one of the latest to join the Ross 400 Club.

“I am really pleased that my efforts in producing a top-quality flock have been recognised and I look forward to achieving more 400s in the future,” he said.

All club members receive an award, certificate, annual newsletter, branded merchandise and have their name added to a role of honour on the Aviagen website.