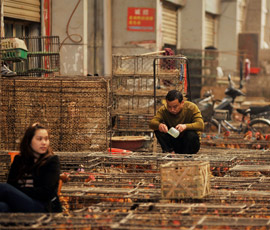 The H7N9 outbreak in China has caused some $6.5bn in losses to the economy, but is now thought to be under control, UN experts have said.

The bird flu virus, which infected 130 people in mainland China since emerging in March, resulted in 36 deaths. At a meeting of the World Health Organisation, health minister Li Bin said no new cases have been detected since early May.

Chinese authorities have shut down live poultry markets “temporarily or permanently as needed” to control the source of outbreaks in 10 provinces, World Poultry reports. Ms Li has also confirmed that methods of transporting poultry have been standardised to reduce spread among birds.

“In view of the present situation, H7N9 is preventable and controllable. There has been no qualitative change in the epidemic. Cases are sporadic and there has been no genetic mutation [of the virus],” she said.

Although H7N9 is highly pathogenic in humans, causing severe respiratory disease, it is not virulent among birds, making it nearly impossible for farmers to detect, experts said.

There is “no red flag” for H7N9 among poultry, unlike H1N1, which kills off flocks, said Juan Lubroth, chief veterinary officer at the UN’s Food and Agriculture Organisation.

“More than $6.5bn has been lost in the agriculture sector because of prices, consumer confidence and trade. So poultry industry losses in China have been high,” Mr Lubroth said. The economic figures were estimates provided by China’s agriculture ministry.