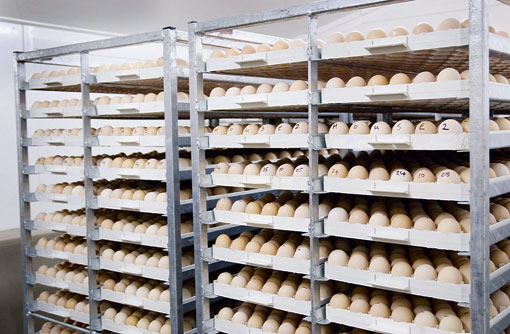 The conditions under which eggs are stored, both on farm and in the hatchery, have a significant impact on rates of hatchability and producers should not lose sight of the basics.

“The longer you store a fertile egg, the greater the drop off in the number of live cells,” says incubation specialist with Aviagen, Nick French. Research has shown that an embryo at four days of storage will contain between 35,000 and 60,000 live cells, and over half of these can die by day 11 of storage.

But the reality of modern poultry production means that storage is a fact of life and fertile eggs need to be kept clean and dry, and at a temperature below “physiological zero” of 24C.

“The longer you store the egg, the cooler the temperature should be, and the higher the humidity needs to be,” he says (see table).

It is equally important to keep a uniform temperature in the egg store, as variation depresses hatchability. Air should be gently circulated around the trays, but should not be aimed directly at the eggs. It is also important to maintain good insulation, ensure that doors are shut tight and avoid having wet floors as these can lead to local cool patches, Dr French advises.

Boxing eggs immediately on farm needs particular care too, as the eggs in the middle of the box stay warmer than those on the outside. “Because they are packed so quickly, they do not cool in a uniform way and this leads to variation when the eggs are moved into the setters.”

Humidity is another factor producers should pay close attention to, with the aim of keeping it as high as possible to minimise egg water loss, but without creating any condensation or mould growth.

Humidifiers must be properly maintained, says Dr French, or they may spray droplets of water on to the eggs, leading to contamination.

It is also important to allow trays of eggs to come up to temperature gradually when moving them from the store room to the setter, as a sudden change from cold air to warm can lead to sweating.

While most breeders like to get on with the job of setting and incubating their fertile eggs, fluctuations in market demand mean this is not always possible and longer term storage becomes necessary, especially on grandparent and great grandparent units.

According to Dr French, there are a number of techniques to minimise the impact on hatchability, including turning the eggs, storing them upside down, keeping them in buggy bags to reduce moisture loss and storing them under nitrogen to reduce oxygen levels.

But recent trial work by Aviagen in the USA has also looked at giving the eggs short periods at incubation temperatures mid-storage – with some encouraging results.

In the experiment, eggs from Ross 308 birds were stored at between 15.5C and 18C, with a relative humidity of 65-75%. At various stages of the storage period, the eggs were then moved into the setters for four hours at 37.5C, before returning to the cooler store room.

The results showed that, whether the eggs were stored for seven, 14 or 21 days, giving them a series of short incubation periods during storage resulted in a marked improvement in hatchability.

For example, eggs stored for 14 days and incubated for four hours on days four, seven and 11 saw hatchability rise from 84% to 87.5%.

“One of our customers has tried this approach in his own hatchery and now does it routinely for any eggs he stores for more than seven days. He has achieved a 6% improvement in hatchability.”

* The above article is based on a paper first presented by Nick French at last September’s Poultry Meat Conference at Stoneleigh.