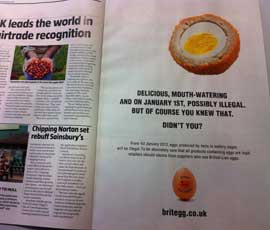 The British Egg Information Service has embarked on the last big push of its campaign to highlight the impending conventional cage ban to food manufactures, with a run of ads in The Grocer magazine.

The advertisements are spread across three pages, with the first two pages showing an egg sandwich and a series of quiches, and finally on the third a scotch egg, saying they may look tasty, but they may not taste so good on 1 January 2012.

“From 1 January 2012 eggs produced by hens in battery cages will be illegal. To be absolutely sure that all products containing eggs are legal, retailers should source from suppliers who use British Lion eggs,” the advertisement states.

Amanda Cryer, spokesperson for the British Egg Information Service, said the organisation had been advertising all year to raise awareness of the ban and now was the final phase to warn the processed food industry.

“We are trying to make it so no one in the food industry can say they weren’t warned,” she said. “The industry has made a big investment this year in making sure that their customers know what’s happening and what’s coming up. We are still particularly concerned about products, which is why these ads highlight products we think are most at risk.”

The advertisement will be repeated in the 12 November issue of The Grocer.