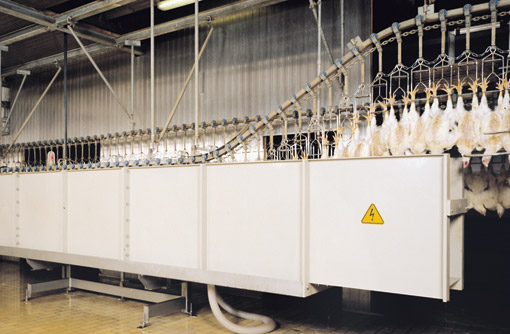 “Advances in humane killing” was the subject of a special session at the recent World’s Poultry Science Association meeting in Nottingham. Ken Randall reports

New forms of electrical stunning in broiler processing plants could overcome the drawbacks associated with current systems and improve welfare, according to Marien Gerritzen of Wageningen Univeristy in The Netherlands.

“Electrical stunning of poultry in a waterbath has long been the common method in Europe,” said Dr Gerritzen. “Existing legislation demands a minimum current of 100mA for each individual broiler, and that all birds are immediately rendered unconscious and remain insensible until death,”

But, in practice, some birds received too much current, resulting in quality defects, while others received too little, allowing the birds to remain conscious.

The presence of several birds in the waterbath created a parallel pathway of resistance involving the shackles and framework, he explained. This, together with the birds themselves, meant the amount of current received varied accordingly.

For years the practical solution to quality defects like haemorrhaging or broken bones had been to increase the frequency and use alternative waveforms. However, new EU regulations demanded higher currents for stunning poultry at higher frequencies.

“From an animal welfare point of view, this will improve stunning effectiveness, but will have a detrimental effect on product quality, with more haemorrhaging and broken bones,” said Dr Gerritzen

In order to improve stunning efficacy and reduce quality defects, a trial was devised that placed electrodes is such a way as to bypass the feet and legs, while stunning broilers individually to ensure they received the correct dose.

The research found that broilers were effectively stunned with a controlled current of 70mA and 100 mA for one or one-and-a-half seconds, when the head of individual broilers were immersed in the water and a separate electrode was placed at the cloaca area.

“Fewer incidences of blood splashes in both fillets and legs were observed in the head-cloaca stunned carcasses than in those stunned in a conventional waterbath,” said Dr Gerritzen.

An alternative approach to whole body electrical stunning was head-only stunning. This method was evaluated using a cone-shaped restraining device in which the broilers were suspended by their feet.

A set current of 250mA for at least three seconds was needed to overcome individual differences in resistance. To prevent risk of recovery, the stun should be followed immediately with a neck cut.

“Since carcass quality is only slightly compromised, such equipment is now being further developed for commercial use,” said Dr Gerritzen.

But for now, the most important practical alternative to the waterbath was a two-phased gas (C02) system.

“Use of this so-called Controlled Atmosphere Stunning method (CAS) has been accepted by governments and animal welfare organisations across Europe. However, the presently available gas stunning techniques have not been adjusted for use in small and medium-sized plants, which represent an important number of establishments.”

Dr Gerritzen also outlined an alternative stunning technique that was suitable for small slaughterhouse that minimised risks to animal welfare from removal of live birds from the transport containers.

A multi-stage gas system has been developed to stun with CO2, while the birds remain in their transport containers and are then placed in a closed cabinet with controlled atmosphere.

Unconsciousness occurs with less than 40% CO2 (Phase 1), followed by an irreversible stun using 65% CO2 (Phase 2). In both phases, CO2 concentration is increased in stages to alleviate uncontrolled muscle contractions. 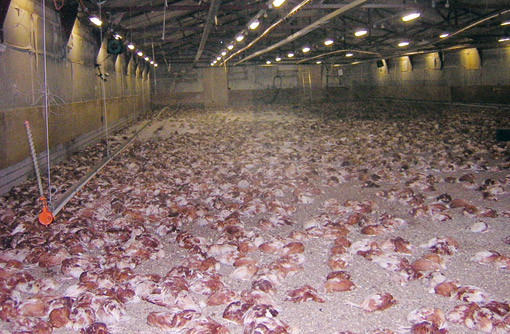 Using carbon dioxide to cull an entire house of birds in situ is potentially a humane method for emergency situations, according to research carried out at the Scottish Agricultural College.

A whole-house trial carried out with a mixture of carbon dioxide in air successfully killed all the birds in a short time frame without any signs of panicking, smothering or chilling of the birds, researcher Victoria Sandilands told the WPSA meeting.

“In recent history, the UK among other countries has culled entire poultry flocks due to notifiable disease outbreaks such as avian influenza. In these circumstances, birds may be killed by removing them from the house and placing them in containers which are then filled with lethal concentrations of gas.

“However, catching and handling live birds can present a welfare risk, while staff may be exposed to the pathogen. Therefore, although lethal gases take variable amounts of time to induce unconsciousness, killing birds in situ tends to be the preferred option for flock sizes of more than 20,000.”

A programme of research was carried out by SAC, with the aim of optimising welfare when poultry were killed for purposes of disease control.

Whole house gassing tests were then performed using CO2 in air. A flock of 12,000 five-week-old pullets diagnosed with Marek’s Disease, were culled by infiltrating their house with liquid CO2 from a tanker via a lance entering the building 1.2 m above floor level.

It took just over five minutes to fill the house with sufficient quantity of CO2 to reach a lethal concentration of 45% CO2. House temperatures at bird level fell to -85C in six minutes, but it was estimated that birds would have lost posture in this test after 38sec, when the temperature was still above freezing point.

“Despite the noise of the gas entering the building, and the aversiveness of CO2 gas to poultry, there was no evidence of smothering or piling up of birds in any area of the shed. Post-mortem analysis of 20 carcasses showed that there was no indication of birds dying from hypothermia.”

The use of gas-filled foam as an alternative method of whole house culling is currently being developed into a commercial system by a research team headed by Dorothy Mckeegan at Glasgow University.

“High expansion anoxic foam has good potential to be a humane method of emergency killing or depopulation for poultry,” said Dr Mckeegan.

“Trials with groups of birds showed that nitrogen-filled foam delivered a reliable and humane anoxic kill which was robust even at maximal stocking densities.”

Although not currently approved for use in the EU, a method using low expansion foam had already been tested and conditionally approved in the USA.

However, the foam used in the USA was high density, with small diameter bubbles, which killed the birds by blocking their airways, giving rise to welfare concerns.

“The use of high expansion foam as a delivery method for suitable gases could be a preferable approach,” said Dr Mckeegan.

By carrying out the process in the dark, birds would not walk away from the advancing tide of foam and were simply engulfed by it.

Submersion in foam filled with both nitrogen or carbon dioxide rapidly induced ataxia/loss of posture and vigorous wing flapping, characteristic of anoxic death.

“Compared with previous reports of anoxic gas killing in nitrogen under laboratory or commercial conditions, the euthanasia achieved with anoxic foam was particularly rapid. This may be explained by the very low oxygen concentrations achieved in the foam (less than 1%), at bird level.”

The trials showed that foam could be an acceptable method of killing poultry for a disease control operation, though wing flapping could cause significant destruction of the foam.