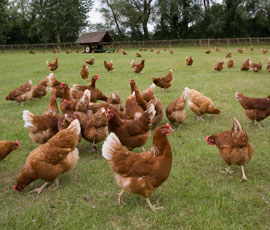 The British Free Range Egg Producers Association (BFREPA) has launched a media campaign with the message that prices must increase if free-range eggs are to continue to be available in the UK.

Increases in feed costs due to poor international harvests over the summer have resulted in low margins across the agricultural sector; however, BFREPA says that free-range egg production is more exposed. Free-range birds’ active lifestyles mean they eat 10% more feed than hens in indoor systems, and the price paid for eggs is not contractually tied to the price of feed, as is the case in some other sectors.

Stuart Agnew, MEP for the eastern region, has echoed these concerns, calling the current market’s volatility unsustainable. “Something needs to be done or free-range eggs will not be available on supermarket shelves in the future,” he said.

The campaign will attempt to get the desperate situation many farmers are facing into the general media. BFREPA quoted Jason Thompson, a free-range farmer based in Dorset, who has had to sell land to pay bills, and has cut the number of hens he keeps by half, as he cannot afford to keep them. Poultry World reported last month that many free-range producers were operating at a loss.

Recent awareness campaigns, such as the NFU’s SOS dairy, have helped pressure retailers and suppliers into increasing purchase prices for milk over the summer. BFREPA hopes to get similar support for the free-range egg industry, but it has ruled out direct action.