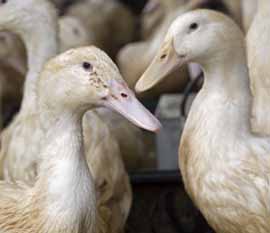 Thousands of fowl have been slaughtered in India after an outbreak of bird flu was confirmed on a duck farm in the north-eastern state of Tripura.

About 3000 birds on a state-run duck farm in the state’s capital, Tripura, were killed, while all poultry within a 3km radius of the site were slaughtered to prevent the disease from spreading.

The government has also begun destroying eggs and feed within the zone as a precaution and put movement restrictions in place.

India first reported an outbreak of avian flu in 2006, followed by another case in 2008. The disease was contained after several thousand birds were killed.

Ricky Thaper, Poultry Federation of India treasurer, said the latest outbreak was not a cause for concern as the disease had been found in ducks, rather than in more widely-consumed chickens.

The outbreak would not have any serious economic impact as the region’s poultry industry was fairly small, he added.

“There is no likelihood of the disease spreading to other areas, as Tripura state is in one corner of the country and not much poultry is produced in the state. Tripura state does not export poultry to other states because of low production in the area.

“Hygiene and preventive measures are very effective in the poultry pockets in the country.

But while infected areas were under surveillance, the threat of virus outbreak still loomed, Mr Thaper said.

“Factors such as hygiene on the farms and the setting up of information sharing systems with neighbouring Bangladesh are yet to be operational, he added.

The federal government said it would split the cost of compensation to poultry farmers affected by the cull with the state government.