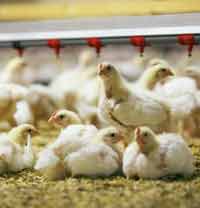 Britain’s broiler sector needs to change direction if it is to meet the challenges ahead, industry leaders were told last month. And it is vital to bring retailers on board in a more constructive partnership if it is to survive at all.

Over the last 18 months the sector had been presented with an unexpected bill of £400 million from the rise in wheat costs alone, said Eric Reid of Moy Park at the Chicken 2009 conference at Stoneleigh Park, Warwickshire. It was a cost that had been borne mostly by the processors themselves.

“Very few companies have made any money because of this huge bill we have had to recover from the marketplace. Yes, we got something back, but not sufficient.

“We are going to have to find some way of trying to bring our retailers and consumers on board to help us cover this volatility. No industry can stand this strain.”

He suggested trying to use options to manage the continuing volatility in the markets, and offering to share any cost savings with the retailers.

“Are we going to drift along and let these things put us out of business? Or are we going to face up to the challenge of trying to change our retailers, by standing firm with our customers, and encouraging them to share the potential benefits?”

There was also an urgent need to address the GM issue: “Some 50% of the meat that is sold in the UK is imported. You can’t test it for GM, so why are we fooling our consumers? We don’t sell non-GM food in the UK, we only have non-GM soya in our chicken feed. We are the only meat sector that does it.”

A similar challenge existed within the EU. Europe’s agri-industry had an on-cost of about £5bn a year, he estimated because it was unable to bring in more feed raw materials from America.

“Even if the EU quickly approves the maize variety causing the current problem, there will be 2-3 more in the pipeline, so we’ll be no better off.

“We need push much harder to get GM technology approved globally at the same speed,” said Mr Reid.

Chicken consumption worldwide was going to double in the next 10-12 years.

“Will Europe want to play a part in that? Or are going to allow the Eurocrats to slow us down, and to put in ever more legislation?”

Livestock numbers other than chicken had been going down around the world because of the recession.

“The poultry sector has seen huge challenges in increased costs, but it hasn’t really experienced the recession, I believe we can manage it better than any other sector.”

Another big challenge was to persuade the breeding companies to change direction on their programmes, he maintained. With volatile feed prices set to continue, there should be much more emphasis on feed efficiency, instead of growth rate.

“Are we prepared to say to the breeding companies, let us slow down on the weight, spend much more money on feed efficiency, because feed is going to be much more expensive in the longer term.”

Cereals might be lower now, but the Northern hemisphere had a very good harvest.

“There’s no more land available, no more water. We have been tinkering on the edge of scarcity.”

There were other reasons to move away from faster growth rates.

“In my lifetime we have taken a day off, on average, every year to achieve a 2kg broiler in 35-36days. Geneticists tell us we will probably drop down to 29-30. Is that really what we want, is that what our consumers want?

“We may be accused of killing babies before too long. These are very dangerous tactics we are following. I believe we’ve got to lift the weight of the broiler to get away from killing these very young birds.

“If the rest of the world is growing 2.5-3kg birds, why in the UK are we down to almost 2kg? We are driven there mainly because the vast majority of our broilers today have got to meet price points, whether £1.99 or £2.99 .”

Unless we make the change within the next year or two, that’s what’s going to happen, and we will be having those birds killed at 26-27 days.

“Why are we the only industry that presents our meat as standard breast fillet or whole bird?”

The number one meat industry in the world was the pig sector, where you chose a slice of bacon or a pork chop.

“Why not grow a bigger bird, and turn it into escalopes?” he suggested.

What do you think the industry needs in the future? Have your say in our forum.