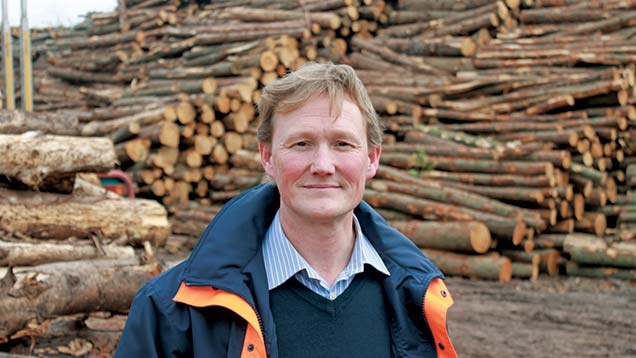 The rapid increase in the number of poultry farms using biomass boilers in recent years has been one of the sector’s real success stories.

Thanks to the combination of lower fuel costs and attractive Renewable Heat Incentive payments, together with the promise of better shed conditions and improved bird welfare, poultry farmers have adopted the technology with gusto.

In most cases, producers have opted for woodchip as the fuel of choice. So far it has proved relatively cheap, easy to get hold of and fit for purpose.

Unlike some other sectors of the renewable fuel market – such as hotels or golf courses – farmers are generally well able to manage this bulkier form of biomass. They have the barns to store it in and the loaders to carry it. And, at £100-£120/t compared with around £200/t for pellets, there is no denying that woodchip is cheaper.

But it’s not all one-way traffic, says Mr Little, and a growing number of poultry farmers are starting to opt for pellets.

“While woodchip is cheaper, it does involve more upfront costs,” he says. “More needs to be spent on storage and handling. Boilers running on chip may also require more maintenance – for example, the augers can get blocked by stringy bark and oversized chip.

The real measure of value is cost per kWh and, when evaluated over the full 20-year life expectancy of a project, the actual costs of the two fuel sources are much closer, Mr Little claims.

The other big issue is quality. “Woodchip is usually locally sourced and the quality is dependent on finding a reputable supplier,” says Mr Little. “If you know your supplier well and get a good 25-30% moisture delivery of consistent quality, or are self-supplying, then good.

“But often chip quality varies and, if sold by weight as opposed to volume, the supplier has an incentive to deliver higher moisture, as water increases weight and is free.”

Wood pellets, he argues, are more consistent, especially as all four of the UK’s main suppliers (Verdo, Balcas, Land Energy and Clifford Jones Timber), are signed up to the ENplus quality assurance scheme.

This is managed by the European Pellet Council and includes A1, A2 and B standards (see box). While the RHI does not specify that you have to use ENplus material, most pellet boilers will only guarantee their warranty if ENplus A1 quality material is used.

“ENplus also covers the hauliers, as handling has to be gentle, or the pellets will revert to dust. Dust affects the efficiency of the boilers and can block augers – something we all want to avoid.”

The market for wood pellets

UK demand is estimated at 400,000t a year, compared with a domestic supply of 350,000t, meaning imports are required.

Piers Ockenden grows 72,000 broilers a crop in three sheds at his farm near Southampton, Hampshire, for Faccenda, with a fourth shed for another 40,000 birds in construction.

Last year he installed two 200kW Hertz biomass boilers, opting for wood pellets rather than wood chips. “We do not have any additional labour, so having a delivery of pellets every crop direct into bins saves me having to do all the handling,” he said.

“It may be more expensive than woodchip, but I know exactly what output I’m getting. During my research, I spoke to several farmers who’d had problems with blockages using woodchip. I get a uniform feed into the boilers.”

Taking this route has also saved Mr Ockenden the cost of building a shed to store woodchip.

A third boiler is already in place awaiting completion of the next shed. He also has gas boilers installed as back-up, and uses Draper ventilation systems to distribute the heat.

The wood pellets are delivered by Verdo Renewables, with each bin taking 12t – enough for a single flock cycle. “They are local to me, which is also a factor as, whether it is chips or pellets, you don’t want to be paying too much for haulage.”

How are wood pellets made?

The logs go into a de-barker, with the bark sent as mulch for garden centres. Total intake comes to 100,000t to produce 50,000t of wood pellets.

Wood chips are taken by loader to a hopper, from where they are augered to the wet grinder and milled down to 10mm “needles”.

The needles are fed into a gas fired drier, achieving up to 400C temperature. Like a giant tumble dryer, they are subject to three passes up and down, with steam vented through chimney.

Now 12% moisture, air and needles are blown through cyclones, with needles dropping out and sent to the dry grinder, which breaks them down to 5mm particles.

From the dry grinder, the particles are pressed by rollers through a 6mm die in the pellet press. Pressure and heat releases the lignen in the wood to bind the pellet. Cutters ensure a maximum 40mm pellet length and production comes to about 150t a day.

The pellets are then sent to the bulk store, where a loader picks them up and tips them into a hopper. They are centrifuged to remove fines (which are collected for reprocessing) and are either bagged or loaded by conveyor at 1t /min into trailers or lorries. The site runs 24/7 with three shifts a day.