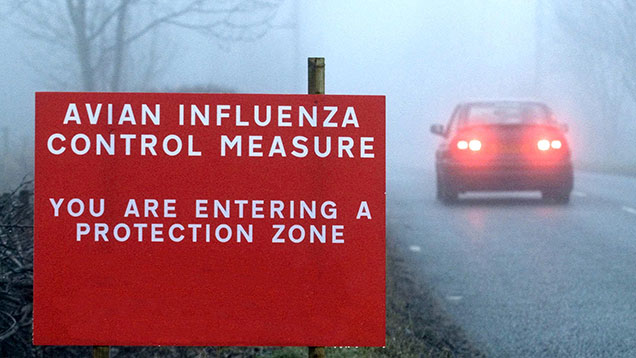 Low pathogenic avian influenza has been confirmed on a broiler breeder unit at Upham, seven miles south-east of Winchester in Hampshire, the Animal and Plant Health Agency has confirmed.

“Tests have confirmed the outbreak as a low severity H7 strain of the disease, a much less severe form than the H5N8 strain found at a Yorkshire duck farm in November,” said a statement issued on Monday evening (2 February). “There are no links between the two cases.”

Low pathogenic avian influenza (LPAI) is usually less serious. It can cause mild breathing problems, but affected birds will not always show clear signs of infection. The severity of LPAI depends on the type of bird and whether it has any other illnesses.

A 1km poultry movement restriction zone has been imposed, the statement added, and the birds at the unit are to be culled.

Restrictions include bans on movements of all poultry and mammals off farms within the zone, on the movement of hatching eggs out of the zone, and on moving or spreading poultry manure within the zone.

“We have taken immediate action to contain this outbreak as part of our robust procedures for dealing swiftly with avian flu,” said chief vet Nigel Gibbens.

“This is a low severity form of the virus and we are taking action to ensure that the disease does not spread or develop into a more severe form. We are investigating the possible sources of the outbreak.

“I would urge poultry keepers in the surrounding area to be vigilant for any signs of disease and to ensure they are maintaining good biosecurity on their premises.”

The advice from Public Health England is that the risk to public health is very low, and the Food Standards Agency (FSA) has said there is no food safety risk for consumers.

A spokesman for the FSA said laboratory investigations on the outbreak indicated that it is the N7 sub-type of H7, “but this will need to be confirmed in further testing”.