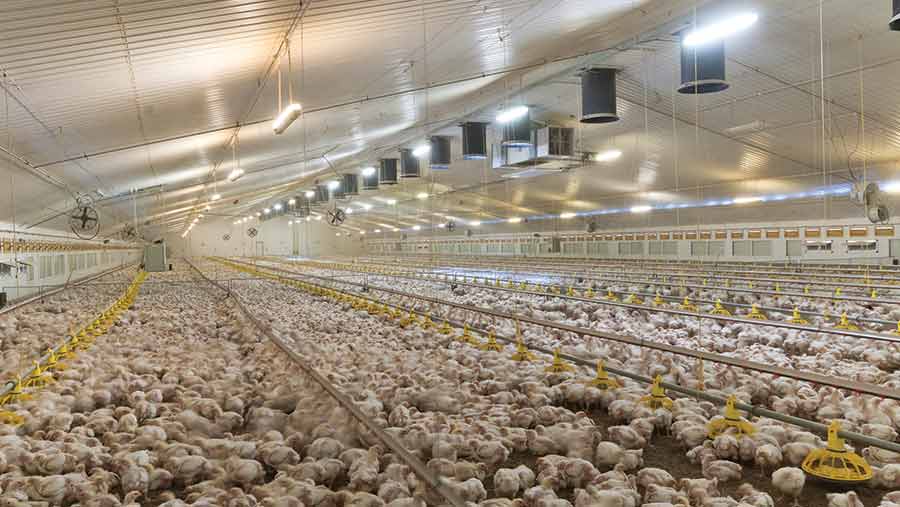 The way a broiler shed is heated can have a significant bearing on the performance of the flock.

Indirect heating of broiler sheds using biomass such as poultry litter as a fuel source can lead to significant improvements in growth rates, new research suggests.

The study, by the Scottish Rural College (SRUC) on behalf of Ireland-based BHSL, looked at three years of data from 40 farms – two of them using the company’s litter burning technology hooked up to indirect heaters, the remainder using whole house gas heaters.

The researchers then looked at a number of parameters, to see if one system performed better than the other.

Overall, broilers from the farms using litter burning with indirect heating were heavier than those from the control farms, after adjusting for age, season, latitude and placement density, says the SRUC report.

Specifically, the birds from farms using indirect heating averaged 2.36kg at point of sale over three years, compared with 2.28kg for birds from gas-heated sheds – an improvement of 0.08kg.

“This is attributed to the availability of consistent dry heat reducing the house humidity while maintaining the temperature and air change for best bird conditions,” said a BHSL spokesman.

It was a similar picture in terms of age at slaughter, with the broilers in sheds heated by combusted poultry litter reaching slaughter weight quicker.

Again, comparing data over three years and adjusting the two sets of data to put the birds on an equal footing, the study found that birds given indirect heat reached slaughter weight after 35.6 days, compared with 36.9 days for the control group.

Furthermore, flocks in sheds fuelled by litter burning showed an even greater advantage in terms of slaughter age in the cooler and wetter months (winter and spring) than flocks grown in summer and autumn.

Report co-author Nick Sparks said the results showed a clear benefit in terms of broiler performance in flocks heated indirectly, rather than directly with gas.

And while this study involved farms using old poultry litter as a fuel source, it might be expected that other forms of biomass heating might confer a similar advantage, he added.

“The key is that this fuel source is cheaper, so producers can afford to be more generous with the heat in the early chick stages, and combine this with better ventilation,” he told Poultry World.

BHSL added that heat delivered by hot water radiators, instead of LPG burners, is drier and has a greater water carrying capacity, which helps dry out the manure.

“The dry heat is also carbon dioxide-free and the fresh air is beneficial for bird health,” it added.

The study also suggested that producers using indirect heating achieve a better performance in their flocks as they get used to using the technology.

This was evidenced by analysis of a data set covering just the past 12 months rather than the full three years. In terms of slaughter weights, their broilers averaged 2.39kg, compared with 2.24kg for birds from conventionally heated sheds – and improvement of 0.15kg. That compared with the 0.08kg gain over three years.

Similarly, in terms of age at slaughter, the birds achieved slaughter weight after 34.5 days with litter burning, compared with 36.4 days in gas-heated sheds over the 12-month period.

That represents an improvement of 1.9 days, compared with a 1.3 day advantage over three years.

“We understand that producers are continuing to learn how to optimise the management of the additional heat provided by the BHSL system,” says the report.

“It is feasible that producers were not maximising the benefits early in the study, and that the benefits might increase in range and magnitude over time.”

The results from the study were less compelling in terms of bird health.

While there was a tendency towards lower mortality on the farms using the indirect heating system, this was not statistically significant.

Similarly, there were small differences in the prevalence of foot pad burn and hock burn between the two systems, but they were not statistically significant.

And in terms of carcass quality, “there was no effect of the boiler on the proportion of broilers rejected at the plant overall, or in the individual seasons”.