A three-year investigation by Slate Hall Veterinary Services into airsacculitis has thrown up some fresh perspectives on the causes of the condition.

An “invisible monster” is how poultry vet Allan Ball describes the perennial problem of airsaccultis in broilers, with severe economic consequences from something that is often hidden from the human eye.

“On site visits, it is often not clear that there is a problem, until it is detected at the factory and we get a phone call saying the slaughter line has slowed because of the high level of rejects,” he says.

These rejects are due to the high incidence of airsacculitis lesions, which are mostly restricted to the abdominal air sacs, but can sometimes affect the thoracic air sacs.

Airsacculitis is caused by inflammation of the air sacs in a live chicken.

It can occur at any stage, and is characterised by watery eyes, coughing and general respiratory distress. 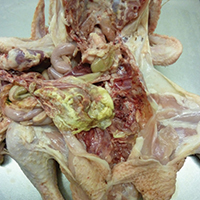 They do not play a direct role in gaseous exchange, but store air and act like bellows, allowing the lungs to function well.

Although improper vaccine use may be involved in triggering airsacculitis, it is usually the result of poor air quality, excessive temperatures, poor drinker management and/or severe environmental stress. 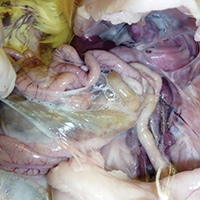 The cilia in the respiratory system may become paralysed and unable to clear contaminants from the lungs.

When this happens, opportunistic infections may occur, which can lead to secondary infection of the air sacs with E coli, leading to the formation of fibrinous lesions.

It is a common cause of carcass condemnation at the factory.

Common causes and how to manage it

According to Mr Ball, “we are dealing with something that is multifactorial”.

He breaks the predisposing factors down into three main groups:

The two most important causes of airsacculitis at farm level are inappropriate ventilation and heating.

With birds growing ever faster, minimum ventilation rates and temperature profiles need to be adjusted to support the physiological demands of the birds.

“The manufacturers’ fan capacity can differ significantly from the ventilation capacity achieved in reality.”

For example, both Ziel and Woods fans, used on some of the 47 farms studied by Slate Hall, have a stated capacity of 12,000m cu/hour.

“As the pressure increases, so these fans shift lower volumes of air, critically important if they are controlling shed minimum ventilation rate.”

Heating capacity and set-up in the sheds is also important, especially at brooding, with radiant heaters linked to higher incidence of airsacculitis compared with box heaters.

“Radiant heaters are very efficient, but we also found some notable hotspots.

“Those sheds associated with higher levels of carcass rejections were often sheds where the birds could not escape from the heat.”

The most defining changes made to reduce the incidence of airsacculitis were:

As well as achieving correct temperatures and air flow, another area where managers can make a real difference is at thinning.

“Some of the sheds we studied had no problems with carcass rejects at thinning, but by the time the birds were depleted, they did present with airsacculitis lesions,” says Mr Ball.

Subsequent investigation showed no particular problem with the thinning practices themselves.

But once the catching team had left, there was a tendency for the remaining birds to stay bunched together, raising floor temperatures to over 33C underneath them.

Activating heaters to encourage bird spread made the situation worse.

“This led to open-mouth breathing – a major factor in the development of airsacculitis. It is important to move the birds post-thinning, to establish a more even spread again.”

These farms inevitably did more bedding up later in the crop, at a time when there was greater bird biomass in the sheds and therefore more heat.

The presence of panting, in conjunction with a high level of dust, led to irritation of the air sacs and increased airsaccuitis.

Despite this, Mr Ball also points out that additional bedding can be a positive post-thin, to encourage the birds to spread out.

Analysis by the Slate Hall vets shows that airsacculitis lesions are mostly associated with secondary pathogens, often working in combination.

E coli was the most common isolate found in the air sacs, with ornithobacterium (ORT) and staphylococcus found in lower incidence.

Respiratory conditions, such as infectious bronchitis (IB), as well as viral challenges, are also likely to have an effect on the birds’ immune status.

Treatment can be difficult, as it is one of those conditions that does not give a great deal of time to indicate any infectious causes.

All contributing factors should be investigated fully and changes to the vaccination programme considered if a viral challenge is confirmed.

The recent introduction of a live E coli vaccine could be useful in countering the build-up of this pathogen in the air sacs.

“The response to medication and vaccination has been partially rewarding,” says Mr Ball.

Almost 50 farms were involved over a three-year period, with any reports of factory rejections triggering an on-site investigation.

There were also targeted, age-related site visits, with post-mortems performed across all sheds to identify lesions in the early stages on “at risk” units.

Dust levels were reviewed at different ages, and there was an emphasis on investigating open-mouth breathing and terminal disinfection programmes.

The investigation found a higher sporadic incidence of airsacculitis in the autumn and spring months, though it was also present in winter.

There was a slightly higher incidence in cockerels compared with pullets, but there was no significant difference according to breed.

“The Cobb bird is slightly more tolerant to heat stress than the Ross, but both birds exhibited open-mouth breathing.”