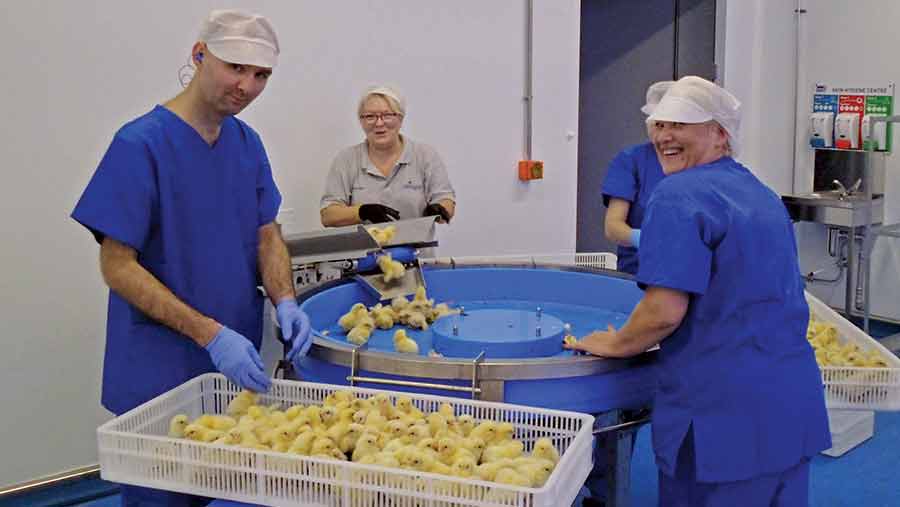 Breeding stock production has stepped up a gear at Aviagen’s main hatchery in the Midlands, as Philip Clarke discovers.

With the ever-present threat of avian influenza, everyone in the poultry sector is taking their biosecurity seriously.

But when it comes to producing parent stock (PS), grandparent stock (GP) and great grandparent (GGP) stock, as they do at Aviagen’s Stratford Hatchery, those precautions are taken to a whole new level.

The site has recently been extended with a new annexe added, almost doubling capacity to over a million chicks a week. It has been an £8m investment which has taken over a year to complete.

Arriving at the site, all vehicles have to be disinfected with a hand-held sprayer and, only once the lance has been put back in its holder, will the gates open.

From there, it’s on to reception to fill out the requisite forms, which have to be countersigned by either the veterinary director, general manager or the hatchery manager.

“We need to know all sorts of things, like who you work for, whether you keep any birds, what was the last site you visited and when, so that we can build up a picture of you as a biosecurity risk,” says Graeme Dear, general manager for Aviagen UK.

Nothing may be carried on to site and, before gaining access to any of the production areas, visitors must shower thoroughly and change into laundered overalls – even including site-specific underpants. Visitors must also submit a swab for salmonella testing.

This procedure will only get you into the old part of the building. To proceed into the new annexe, anyone who is not full-time staff has to go through the showering and changing process again in a separate shower block.

A very few full-time staff may move more freely between the two buildings, though they will still have to have a dry change of clothes. They, like all hatchery employees, are also tested weekly for salmonella.

With two separate buildings – albeit under one massive roof – the site effectively operates as two hatcheries.

“That is the norm, though we can do PS in the old building too, if we get a particularly big order,” says Mr Dear.

“As the global business consolidates, and we get bigger orders from around the world, the times we do this will probably increase.”

The old building has a total of 50 ChickMaster setters and 24 hatchers of varying sizes.

This gives a greater degree of flexibility when it comes to allocating eggs for particular orders – especially useful considering that order sizes for some higher generation stock can be relatively small.

In contrast, the new annexe has two setter rooms with 30 setters in total, which then feed into 15 hatchers – all the same size with a capacity for 23,760 hatching eggs in each.

All setters and hatchers are also from ChickMaster, which guarantees uniformity and aids efficiency.

The site is set up so that neither eggs nor chicks from either of the two buildings will mix, although they can come together in the truck if they end up going to the same customer.

Eggs arrive from Aviagen’s egg depot at Lockerbie in Scotland, which gathers fertile eggs from over 60 supplying farms.

They are placed in a storage room that serves both parts of the hatchery, until it is determined which particular order they will be assigned to.

This requires painstaking and detailed planning. Obviously things like breed are predetermined. But markets move and orders can change, especially with diseases like avian influenza affecting the country’s export status.

Hatchery managers have to be light on their feet, to match up supply and demand.

To aid the process, Aviagen has installed Petersime Spides machines in the new building, to try and improve hatchability in eggs that have to be stored for longer than anticipated.

The system works by giving stored eggs a short burst of heat, before dropping back to store room temperature.

Experience to date, including trials with a Spides machine at the Lockerbie egg depot, shows a 2-3% better hatch in eggs stored for 7-14 days, and much more when they are stored for over two weeks.

“Having this equipment aids flexibility,” says Mr Dear. “The Spides cycle takes about 12 hours to complete and we have the capacity to treat 100% of our deliveries in this way if need be. I can envisage that we will be doing it almost routinely in about six months.”

All egg handling equipment in the new part of the hatchery is made by Innovatec, including candling, transfer and take-off, as well as the trolley wash and sexing carousel.

Both buildings also have Embrex Inovoject machines to deliver certain vaccines into the developing egg.

Currently these machines are only used to meet specific customer orders, with countries where Marek’s disease is a particular threat being the main outlets with this requirement.

“But the volume of eggs we treat in this way is going up all the time, and at some point it might make sense to do the lot,” says Mr Dear.

Once hatched, the chicks are taken out of the hatchers in their baskets and transferred to the sexing carousel. This one has 18 different positions, to cope with the scale of production.

The birds all have to be vent sexed, as feather sexing is not an option with the main Aviagen products. Once selected, the females are sent one way for vaccination, grading and boxing, with about 15% of the males joining them.

The remaining males are separated and sold as “off sexes” for poultrymeat production. “Since they are a generation up, they may not perform quite the same as commercial broilers.”

Inside the Stratford hatchery

The new building was completed in the summer of 2015, adding another 3,750sq m to the floor area of the site.

Hatching is generally carried out five days a week, followed by two clean-down days, with the new annexe adding over 400,000 eggs a week.

First chicks were hatched at the end of November, and the facility is already operating at close to full capacity, says Aviagen.

The site handles the whole portfolio of Aviagen brands, from Ross 308s and 708s which dominate in the UK market, more specialised breeds like the Rowan Ranger, through to Arbor Acres and Indian River for the export markets. About 30% of the site’s output is for domestic customers, with 70% for export.

There are a total 80 staff at Stratford split between the two buildings, with 35 having been taken on in the past six months to operate the new annexe.

The new building forms part of the Aviagen “compartment”, which means that, in theory, if the UK as a whole, or a particular region, are deemed “AI-positive” following an outbreak of avian influenza, chick production and export can still carry on without interruption, subject to the receiving country accepting stock.