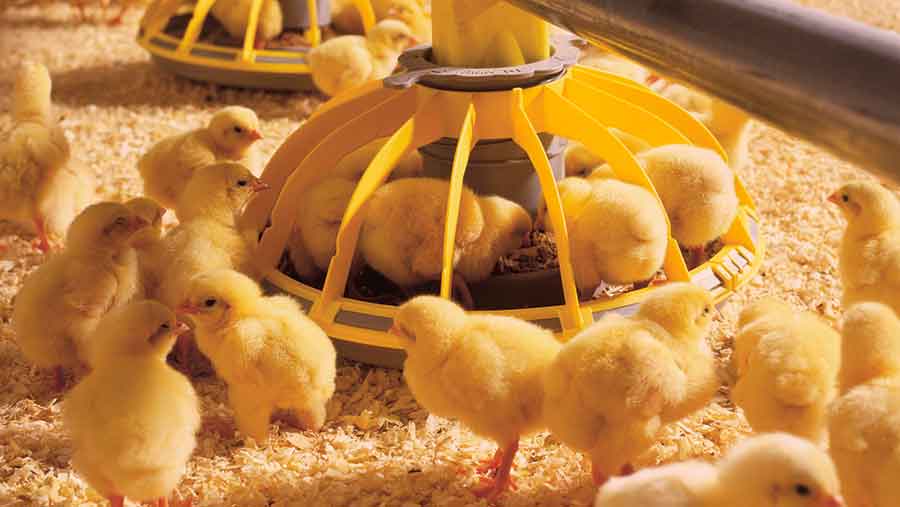 Yeast-based dietary interventions are effective at significantly reducing the level of natural campylobacter spp colonisation in the broiler caecum.

The study, carried out at Alltech’s European bioscience centre in County Meath, Ireland, wanted to look at alternative ways of reducing campylobacter in the light of the increase in antibiotic resistance spread and drive to cut antibiotics.

Its aim was to examine if dietary supplementation of broilers with three different yeast based products (T1, T2 and T3) reduced the level of natural campylobacter spp, colonisation in the caecum.

Birds were allowed to naturally acquire Campylobacter spp colonisation from the environment and were tested at days 21 and 35 post hatch using plate counts of caecal swabs and at day 35 using quantitative PCR (qPCR) testing.

Results from plate count analysis at day 21 showed that Campylobacter spp, colonisation had successfully occurred in the broilers and at day 35 the level of colonisation was highest in the control group with decreasing levels in T1, T2 and T3 respectively.

No significant differences were noted using plate counts at day 35.

Further analysis of the caecal content by qPCR showed that both T2 and T3 significantly reduced the levels of Campylobacter spp, colonisation in the broiler caecum.

While T1 did not significantly reduce the level, levels were still lower than in the control group.

Enzyme additions to broiler diets makes no significant difference in either feed intake or weight gain for broilers, according to research carried out in Ireland.

Ten rapeseed meal and distillers dried grain-based diets for broilers were used to examine the efficiency of phytase and protease in broiler diets.

The study found that there was no significant effect on either feed intake or weight gain during the period but when a 3% reduction in amino acids was adopted feed conversion rates were poorer in both the starter period and overall compared to when a 1.5% reduction was adopted.

When phytase was included, feed conversion rates improved in the grower and finisher period, but the scientists found there were no other significant effects of enzyme addition on bird performance.

The research was carried out by scientists at the Agri-Food and Biosceinces Institute, Hillsborough, in conjunction with Devonish Nutrition Ltd and Teagasc in County Cork, Ireland.

Earlier the better for prebiotic application

Prebiotics or synbiotics should be given as early as possible to ensure the best immune protection for newly hatched chickens, according to Polish research presented at the conference.

Delivery in-ovo on the 12th day of incubation ensures the efficient transport route of bioactives from the egg chamber, through the highly vascularized allantochorion to the gastrointestinal tract. Upon hatch the in ovo modulated profile of gut microflora has influence on the good health of the chicklet eliminating the need for antibiotics.

The researchers, from the University of Science and Technology in Bydoszcz and the Department of Animal Biochemistry and Biotechnology at Mazowiecka, wanted to know whether the beneficial condition of the gastrointestinal tracts was reflected in the morphology of the intestines and might be maintained through the lifespan of the bird.

The study looked at the microstructure of the bird’s duodenum and jejunum at 42 days after in ovo manipulation. Two synbiotics (S1 and S2) were injected in ovo at the 12th day of egg incubation.

After treatment, birds who had received S1 put on more weight and scientists also noticed an increased length of their duodenum and jejunum than in the control of S2 groups.

This beneficial effect was reflected by the numerically higher villi with larger surface in the duodenum in group S1. There was also an increased height of villi, smaller crypts and decreased number of neutral goblet cells noted in the jejunum in group S2, which is positive at the end of bird rearing.

“Overall, a single ovo treatment with S1 and S2 beneficially affected the structure of intestine at 42 days. The effects differ depending on the formulation of the symbiotic,” the report concluded.

Testing for the diagnosis of two of the most common nematodes in chickens could best be done by using samples from egg yolks, according to German and Italian scientists.

The study looked at ways to compare diagnostic ability of the newly developed Elisa test with facecal egg counts (FEC) in chickens experimentally or naturally infected with either Ascaridia galli (Ag) or Heterakis gallinarum (Hg)K – both of which are currently re-emerging.

An Elisa based in Ag body antigens was developed to measure antibodies against both Ag and Hg, in plasma and egg yolk samples, which were collected from experimentally or naturally infected chickens or from uninfected controls.

Worm burdens were determined 28 to 30 weeks post infection in two separate experiments performed with either nematode.

Both the Elisa and the FEC tests had the highest specificity 9100%) in the Ag-Exp, whereas 7-10% of uninfected control birds were false classified in the Hg-Exp with no difference between the Elisa and FEC.

Elisa with plasma or egg yolk and the FECs resulted in similar test accuracy with sensitivities ranging from 82-93% in the Hg-Exp. The Elisa had a sensitivity of 87.5 and 95% using plasma samples to identify naturally infected animals harbouring either Ag or Hg.

But when egg samples were used, the test sensitivity improved for Hg (100%). As the egg yolk antibodies provide the highest test accuracy with both nematodes and are able to be collected from the animals in a non-invasive, host-friendly way, the scientist suggested the Elisa system with the egg yolk samples was the most accurate diagnostic test.

The research was carried out at the Leibenz Institute for Farm Animal Biology, Germany; the Faculty of Science and Technology, Italy and the Wilhelm-Stahl-Allee centre, Germany.

*The above papers were presented at the recent European Federation of Animal Science annual meeting.