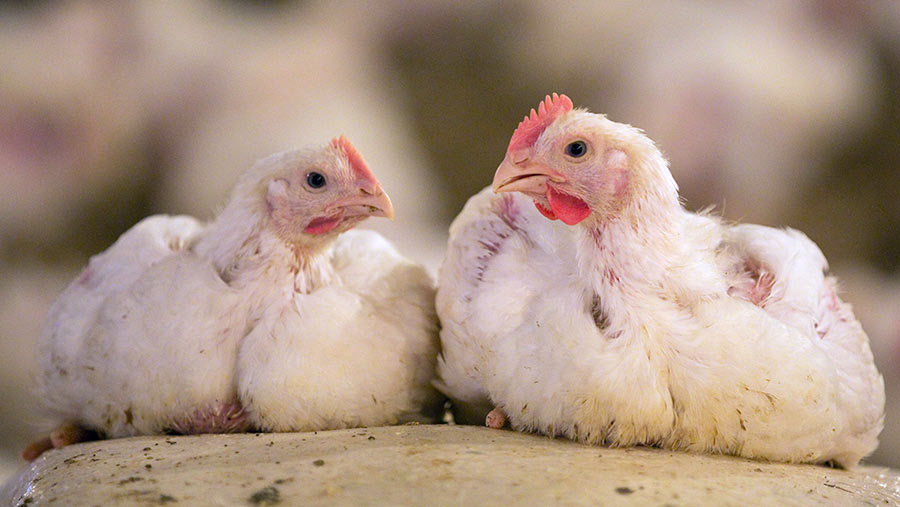 Entry to the club is for those farmers that have achieved a European production efficiency factor (EPEF) of 400 or more for their entire farm placement across all houses.

Aside from the recognition, winners can access a private forum where they can share tips on broiler production.

But the annual total grew over the next decade, and last year saw more than 350 farmers recording top flocks – a testament to improvements in bird management over that time.

See also: Why home-mix rations are making a comeback on poultry farms

EPEF is an equation based on average daily weight gain, mortality and feed conversion, and allows farmers to generate a standard measure of farm performance.

“We’ve had old farms and new farms winning – the smallest multiple winner was a 30,000-bird site and the biggest is a farm with more than 390,000 bird places.”

Aviagen has lifted the qualifying standard from 400 to 420, as well introducing its Ross Gold Club level last October.

More than 20 growers have already achieved the gold standard – three crops in a row over 400, or a single flock 10% higher than the club entry level at a given point in time.

The lift in performance over the past 10 years comes despite a trend towards rearing birds as-hatched, rather than sexed, which produces a wider range of slaughter weights and slightly reduces costs but makes top performances harder to achieve.

The reason behind that is supermarkets are selling fewer whole birds and more poultry products that require a wide range of cuts and weights, according to Mr Thomson.

He recently won a Ross Gold award for having three flocks with an EPEF of more than 400 points in a row.

That total now sits at five straight flocks with scores over 400, and he says a big part of his success is keeping his team of three to the same standards he employs.

“Whoever is walking the birds, whether it is me, my assistant or a stockman, they know what is expected of them,” he says.

That’s particularly important when it comes to biosecurity, making sure everyone on the farm follows the correct procedures. The rest is attention to detail.

How data can help achieve a 420 EPEF

Getting to the best performance on broiler farms is about understanding what is happening at any given point, and adapting management to each shed individually, says Mr Thomson.

Over the past few years, the biggest shift he has seen is the use of computers systems to capture data – not just entire room analysis, but splitting sheds into smaller segments and making management decisions based on that data.

Things such as water sensors on nipple lines, feed weighers to determine consumption in real time, individual carbon dioxide, humidity and light monitors are all becoming much more commonplace.

As are cameras that allow remote monitoring of stock – the best systems can zoom in on individual birds, or monitor whole house activity.

But technology is just a tool, and the first thing a farmer should do before entering a bird area is listen.

“Before you open the door and the birds react to you, do they sound like a normal flock, or different to how they sounded the day before, or the last day you were in the house?”

In the first week, measure the ratio between weight at a day-old and seven days, rather than just the target weight.

The company says that the changes reflect improvements to the genetic potential of its birds, and that the new targets should be achievable by any farmer under good field conditions.

Breastmeat percentage is also up, from 21.6% to 23.68%, when compared with the breed standards from five years ago.

That is part of the reason for the changes to the 400 club – based on the 2014 performance objectives, a 400 EPEF would be 4% over the breed standard.

A 420 EPEF is broadly the same when compared to the updated 2019 target standard.

“If your chicks have come from a young parent flock, there’s no point at chasing a 200g seven-day weight.

He suggests weighing about 100 chicks at the same time as taking vent temperatures at the beginning of the flock, and either looking at the coefficient of variation or evenness.

A flock on its way to a high EPEF will record most chicks growing four-and-a-half to five times in size in the first week.

“If you haven’t achieved that growth, then it’s worth looking at your chick start procedures in the next flock,” he says.

Mr Thomson says that most farms he encounters do the basics very well, but it is the finer detail that sets the best performers apart.

They will have an intimate understanding of shed ventilation, for example.

“It’s not just bringing air in and taking it out, it is getting fresh air across the birds in the right manner, at the right level and not causing chill,” he says.

Getting to a high standard

Not every farmer will be chasing top EPEF scores.

Fundamentally, it is margins that matter most – spending a fortune on the best feed to improve performance at the cost of profits makes no sense.

But any gains through improved management add to the bottom line – often without a great increase in costs.

Independent consultant Gemma Smyth, who trades as GMS Consultancy, recently helped a client take their farm from an EPEF in the mid 80s to more than 400.

“Biosecurity is probably one of the most important things to put in place,” she says.

“Without good biosecurity procedures, you are never going to get top performances.”

Beyond that, it is about experimenting to find out what works for individual sheds on a farm.

Ms Smyth will typically review ventilation using smoke bombs to determine airflows, regularly test water quality and PH, and will advise on putting procedures in place for managers to follow.

Looking carefully at how birds feed in their first few days, and the placement of chick paper is also an important part of a farm chasing better figures.

“Every shed is different,” she explains.

“Managers need to understand each individual unit on a farm to really lift performance.”

He regularly uses kestrel wind measures – which monitor air speed, temperature and carbon dioxide levels – and splits a shed into 16 regions to determine how air is moving in the entire shed, and pinpoints the crossover points between vents that influence airflow.

“In spring and autumn months, when the days are warmer and nights cool, it becomes critically important to get this right.”

With water, a lot of farmers are beginning to look at pH levels in more detail.

More acidic water is less likely to harbour bacteria, as pathogens such as E coli don’t like it, says Mr Thompson.

While common in continental Europe, weighing feed as it is delivered to birds has historically not been popular in the UK.

But that is changing, and being able to monitor feed intake in near real time and compare it with water consumption can be yet another valuable tool in top farmers’ toolkits.