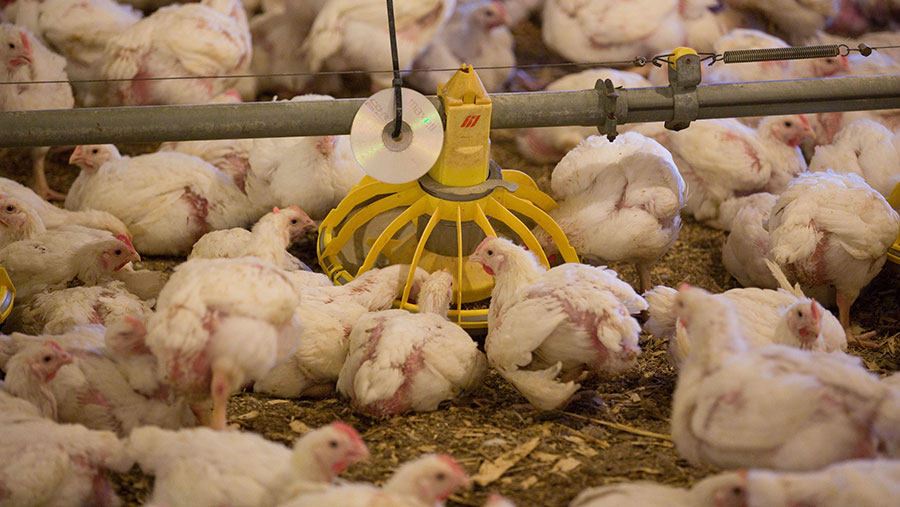 Farming systems where thousands of animals are together have to primarily rely on the skill of a stockperson’s eye while walking through sheds.

There are increasingly sophisticated monitoring technologies that help producers in this task, monitoring things such as feed or water consumption or shed temperature, humidity or airflow.

But they all look at the bigger picture, and are generally unable to distinguish individual birds’ behaviour, size and other measures like gait scoring or playfulness.

What could the new system detect?

What is the new technology?

That’s where a new project which uses cameras and technology originally designed to monitor crowds of people in situations such as stadiums, transport hubs or major sporting events comes into play.

The work is a joint project between two distinct faculties of Queen’s University Belfast – one focused on the digital world and the other on farming and food security.

Paul Miller, from the university’s Institute of Electronics, Communications and Information Technology, says the analytics software his team have developed initially had a human application in mind.

It is effectively an algorithm that can analyse video sequences and extract information from them that is useful for a decision maker. That technology has so far been focused on “crowd resilience”, Dr Miller says.

In particular, the system is trying to detect when a group of people demonstrates unusual behaviour around an object such as a bag, or an individual acting differently, and alert the relevant people to it in near real time.

How can it be applied to poultry farming?

Broilers are a more complex prospect, according to Dr Miller, because unlike humans who look distinct and wear different clothes, they are far more uniform.

Therefore, the ambition is to look at a far wider range of metrics, according to animal behaviour specialist Niamh O’Connell.

“We want to be able to count and track individual birds so that we know more about their activity,” she says.

That could help with monitoring things like playfulness or gait score – both key welfare indicators. It could also analyse feeder and drinker usage throughout the shed

The technology is also able to detect physical attributes, such as size of birds, and Prof O’Connell says it could ultimately be able to analyse the weight of birds, building an accurate picture of how the flock is performing, what its stocking density is, and exactly when it is at slaughterweight.

Some of these measures will help form a score for flocks to demonstrate birds’ welfare or other performance metrics at the end of a cycle.

But many could potentially offer farmers insights that will drive management decisions in real time.

A higher proportion of poor gait scores could indicate a litter problem, for example.

This could be particularly important in the early stages of a crop, when getting consumption right is most critical.

Another key feature that Prof O’Connell hopes to develop is the ability to monitor broilers’ playing behaviour.

Properly stimulating behaviours like playing activity, for example, will lead to birds moving well right up to slaughterweight.

“There’s certainly interest in capturing that positive behaviour from within the poultry industry,” she explains.

The next stage will be to validate how accurate the system is, and eventually to build a dashboard that will give farmers the means to make management decisions based on the camera’s observations.

Ultimately, Prof O’Connell says, one of the most exciting prospects for this wave of new analytical and objecting measurement of broilers is the ability to pick up on traits that are not currently observed.

“There is a wealth of data and untapped information on poultry farms about how birds are interacting, both with each other and their environment,” she explains.

The Queen’s University Belfast project has won funding from a major initiative that aims to improve broiler welfare through better monitoring.

The Foundation for Food and Agriculture Research (FFAR), in collaboration with McDonald’s, made the grants as part of a first phase.

This project received $310,738 in funding for the scheme to develop the technology. Other winners of funding in the first round include:

Marian Dawkins, with the University of Oxford and in partnership with Munters and Tyson Foods, who is testing the ability of a novel camera/computer system called OpticFlock to monitor broiler chicken welfare. Cameras monitor bird behaviour and deliver a “verdict” every 15 minutes to alert producers to early signs of broiler welfare issues, such as foot pad lesions and lameness.

Ingrid de Jong, with Wageningen University & Research, along with collaborators, is developing a camera-based system and artificial intelligence that automatically records broiler chicken behaviour on-farm. The 2D and 3D cameras will continuously monitor broilers’ ability to walk, interact with each other and the environment, and other natural behaviours such as running, playing, foraging and dustbathing.