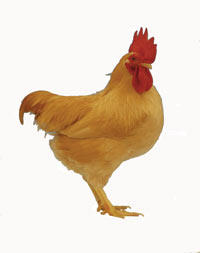 The Anglesey show ground must be one of the most exposed in the British Isles; even on summer days it can be buffeted by strong winds and this year was no exception.

While the rest of North Wales was basking in sunshine, the Mona airfield felt too close to the Irish Sea and potential storms. However, the surrounding scenery fully compensated for this with huge mountain ranges dominating the skyline. This year, these mountains were home to many of Anglesey’s major prizewinners.

None are as remote as John Arwel Hughes from Llanberis in Snowdonia. John has consistently won with his waterfowl in the area for nearly 30 years. This year he won the overall waterfowl championship with a grand Toulouse goose.

An old school friend of John Arwel Hughes is Dilwyn Green from Penisarwen. Dilwyn is the Anglesey secretary of show, but is universally known for his wonderful Silkies. He’s won countless major awards including national titles with this breed. So spectacular has been his success that we forget that Dilwyn shows other breeds, including Welsummers.

In fact he won with a fine Welsummer at Anglesey. Many also don’t realise the huge commitment which Dilwyn has made to many young exhibitors. This commitment has resulted in a formidable group of young men from North Wales joining Britain’s top league of exhibitors. Maybe they’ve been too well taught as they’re now beginning to topple even some of the Welsh poultry legends.

A perfect example is Aeron Williams. Last year, Aeron had a phenomenal year during which he won an incredible eight junior championships. He won most of these top titles with his outstanding Australorps, but he also keeps some excellent Buff Rocks. It was one of these Buff Rocks which gave him the supreme championship at Anglesey.

The spectacular mountains of North Wales seem to produce some of the most impressive Oxford game in Britain and there’s no doubt that this must be one of the few areas of Britain where Oxford game are more popular than Carlisle game. Consequently, Oxfords usually dominate the prize cards, but this year this didn’t happen.

Surprisingly, the coveted Wollstonecraft game cup went to an English exhibitor from Cheshire. However, it wasn’t surprising to learn that the exhibitor was Clarke Alexander and the winning bird was one of his excellent Black Old English Game. Clarke has perfected his bantams for over 50 years, so it’s no wonder that birds are held in the highest esteem.