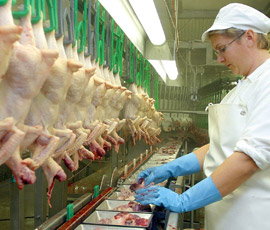 Irish processor Cappoquin Poultry is for sale again just nine months after it was sold by an examiner.

Michael Butler of Butler & Co Insolvency Practitioners has been appointed as receiver and manager by Close Invoice Financing Limited, charged with disposing of a company with debts of more than €6m (£5.16m).

There is reportedly some interest from potential buyers of Cappoquin, which has 70 workers and capacity to process 11 million birds annually.

“At the moment there are no chickens being killed, some of the farmers haven’t had chickens since last year. The situation is very precarious, a lot of farmers feel hard done by,” said Alo Mohan, chairman of Irish Farmers’ Association’s poultry division. There were up to 28 growers a year ago, but only 12 of late.

Mr Mohan feels that retailers need to commit to Irish poultry. Next week in a meeting with the Irish food board, Bord Bia, he will seek labelling changes so consumers can see clearly where the bird was reared, slaughtered and packed.

He hopes that a new buyer will be found for the ailing Cappoquin – preferably a strong company with access to major retailers in Ireland and the UK.