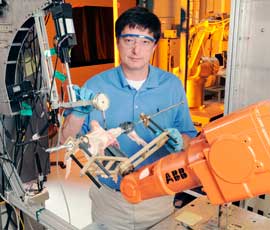 Funded by the state of Georgia through the Agricultural Technology Research Program at GTRI, the Intelligent Cutting and Deboning System employs a 3-D vision system that determines where to cut a particular bird.

Furthermore, it is designed to adapt to the size and shape of individual birds.

According to the researchers the device automatically performs precision cuts that optimise yield, while also greatly reducing the risk of bone fragments in the finished product.

The vision system works by making 3-D measurements of various location points on the outside of the bird.

Then, using these points as inputs, custom algorithms define a proper cut by estimating the positions of internal structures such as bones and ligaments.

The bird is mounted on a six-degree-of-freedom robot arm that allows alignment of the bird and cutting robot to any desired position.

The robot arm places the bird under the vision system, and then moves the bird with respect to the cutting robot.

During a cutting operation, the sensor enables the robot to detect imminent contact with a bone. Then, instead of cutting straight through the bone, the system directs the cutting tool to take an appropriate detour around the bone.

Gary McMurray, chief of GTRI’s Food Processing Technology Division, said he expects the Intelligent Deboning System to match or exceed the efficiency of the manual process.

“There are some very major factors at play in this project,” Mr McMurray said. “Our automated deboning technology can promote food safety, since bone chips are a hazard in boneless breast fillets. But it can also increase yield, which is significant, because every one percent loss of breast meat represents about $2.5m to each of Georgia’s 20 poultry processing plants.”