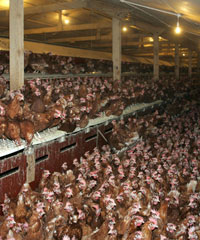 Scientists in Hong Kong believe they have made a breakthrough in the fight against H5N1 avian flu by creating a genetically modified rice which could routinely protect birds from the virus.

The rice contains genes from yuzhu, a plant used in traditional Chinese medicine, which has been found to inhibit the growth of viruses.

The scientists at the Chinese University of Hong Kong announced that they had produced a small quantity of the modified rice, which had been tested in a laboratory dish in a solution with monkey cells and the H5N1 virus.

“During the experiment, the grain prevented the monkey cell from being destroyed by the virus,” said team leader Samuel Sun Sai-ming.

He added that they were now looking to take their research to the next stage of testing it on birds.