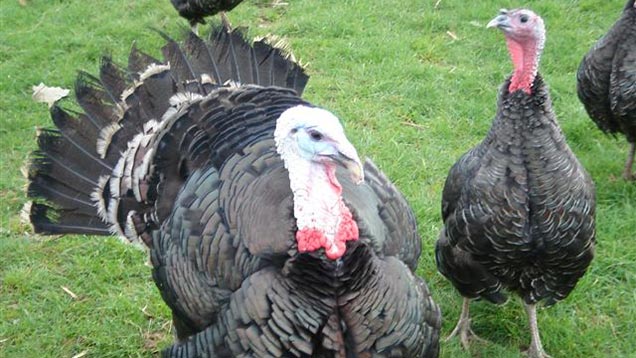 Christmas turkey growers are anticipating increased margins this winter, as prices to customers and production costs head in opposite directions.

Addressing the Anglian Turkey Association’s (ATA) annual marketing meeting in Essex, NFU poultry adviser Tom Lander explained that, based on industry feedback, the total cost of producing a 5.5kg turkey was down by 4% this season.

This was primarily the result of significantly lower feed costs – down 12.2% at £7.20 a bird – as wheat and soya values had fallen in response to large end-of-year stocks.

Guild butcher Andrew Edmonds, from Bradwell, Norfolk, confirmed that while the majority of his Christmas sales were still whole birds, the real growth was in turkey breasts, which he tended to source from a local cash and carry.

“We’re up against it,” he said. “Customers want something they can eat in one meal at a reasonable price.”

He said butchers needed more help from producers to enable them to sell more whole birds.

A bullet-point list of all the attributes of farm-produced turkeys would really help his staff pass on some of the enthusiasm for the product that was so apparent when talking to the farmers, he said.

Paul Kelly of Kelly Turkeys called for an industry-wide campaign to promote whole birds next year.

Farming costs (heating, litter, shavings and farm labour) were also down, by 5.8% to £3.40 a bird, mainly reflecting lower gas prices.

And while processing labour, distribution, waste removal and overhead costs had all gone up in 2015, the net effect was still a 4% drop in total costs.

Despite this, some producers at the meeting suggested they would either be holding prices steady or putting them up slightly.

Howard Blackwell, who is rearing 5,500 turkeys and 1,800 geese on his Heron’s Farm in Essex, said he believed the market could take a small increase.

“We have held our prices for a couple of years, which has enabled our butchers to increase their margins,” he said.

“Feed is cheaper, and so is the fuel, but I haven’t increased my labour charge much over the past three or four years and I think I have to pay some of my guys a bit extra this year.

“My labour cost is almost as much as feed, and waste disposal has also increased quite a bit, so I’m looking to increase my prices by 3-5%.”

Tom Copas Jnr from Berkshire said his turkeys would “probably go up a little bit”.

He anticipated feed costs would jump next year, so it was better to “eke up a little bit” now, rather than impose a big price jump next year.

ATA chairman Jim Strathern agreed “the economy is not too bad”, suggesting a small increase could be justified.

Paul Kelly said Kelly Turkeys would be staying the same as last year, but he would certainly not be cutting prices.

“My belief is that cereals are artificially low at the moment and so are fuel costs. They can’t stay that low forever, so next year, undoubtedly, they will be more expensive. If you did put your prices down this year, you’d only have to go up a lot next year.”