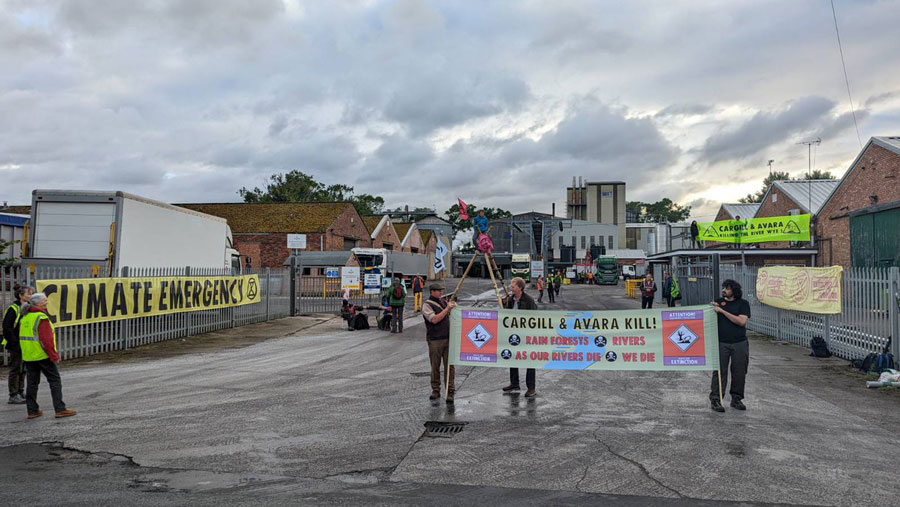 Climate activists are staging a blockade outside the entrance of a Cargill-Avara feed mill in Hereford.

Members of the Extinction Rebellion Midlands activist group turned up at 6am on Monday 25 July outside Cargill’s Allensmore feed mill.

They constructed a 3m-high bamboo structure and unfurled banners claiming Cargill and its joint parent company Avara are “killing” rain forests and rivers. At least one protester handcuffed themselves to the structure.

Avara Foods, which is jointly owned by Cargill, is the third-largest poultry producer in Britain, and it supplies some of the UK’s largest supermarkets and restaurants.

Protestors accuse Cargill-Avara of supplying the feed to “intensive” poultry units that are polluting the river Wye in Herefordshire and Powys with manure.

They have demanded that the feed supplier stops supplying these farms and “must not build new intensive poultry units of any size, or expand existing units in the Wye catchment area”.

The activists have also accused Avara-Cargill of buying soya grown on deforested Amazon land, which is then fed to chickens on farms up and down the River Wye. They are demanding an “immediate end” to the sourcing of Brazilian soya for poultry feed.

A spokesman for Avara Foods defended the company’s records.

“It’s clear that Extinction Rebellion object to what we do as a matter of principle, but there are many more people across the UK that value what we do,” said the spokesman.

“Whether it’s the Wye, sourcing soya, or any other aspect of our environmental footprint, we’re committed to reducing our impact on the world and are already taking action.

“We’ve consistently said that positive and lasting change will come from collaboration and support between those that care about the issue, and we will continue to work with groups that share that view.”

The activists are staging a joint protest outside Herefordshire council’s building to protest council approval of large poultry units in the area.

The protests are part of a series of climate demonstrations by the group over three weeks in July.

A spokesman for West Mercia Police said: “Officers are currently facilitating peaceful protest at two sites in and around Hereford.

Supt Edd Williams said: “We are working with staff and protestors to ensure the protests run smoothly and with minimal disruption to the public.

“If you have any concerns please speak to officers at the scene.”

No arrests had been made.

Wales’s first minister Mark Drakeford hosted a summit at the Royal Welsh Show last week with industry to discuss ways to tackle phosphate levels in conservation rivers, including the rivers Wye and Usk.

Mr Drakeford said it was a “multi-faceted” problem, adding that the farming industry, water companies and the building industry would all be asked to take steps to prevent the pollution in a forthcoming action plan from the Welsh government.