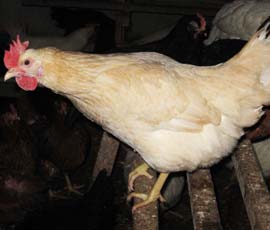 A strain of layer bird from north Jutland in Denmark could hold the key to increased resistance to disease in poultry, reducing susceptibility to common diseases such as salmonella and e-coli.

A €2.3 million study is currently underway to isolate the gene in the traditional Hellevad strain of egg layers which produces the mannose-binding lectin (MBL) protein, which binds to a pathogen’s surface, activating the immune system to destroy bactria, fungi, parasites and viruses in the bird.

The majority of the money (€1.55m) for the four-year study at Aarhus University has come from the Danish government, with an extra €350,000 provided by poultry genetics company Cobb, which is interested in assessing the MBL levels in their parent lines.

MBL has been found to be three times higher in the Hellevad birds than in other strains of bird.

“It is so effective in enhancing the innate immune system that it has even been called the ‘miracle protein’,” said Dr Helle Juul-Madsen, senior scientist at the university.

Currently the work has focused around DNA sequences believed to be linked to MBL levels, with scientists looking for tell-tale changes in the DNA coding that represent alternative forms of a gene and then linking them with the specific trait.

Eventually the researchers hope to determine if there is a sex linkage in MBL levels in the Hellevads.