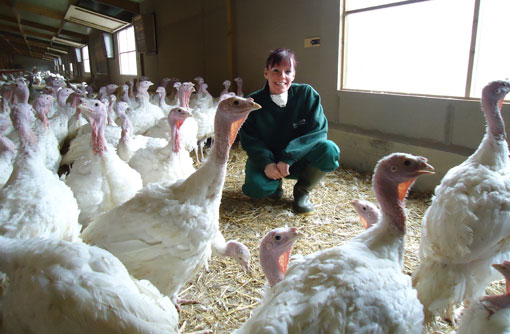 Indoor turkeys can be reared at a variety of stocking rates in natural light, without detriment to health and welfare, so long as they also have access to appropriate environmental enrichments.

That is the conclusion of research carried out by the UK’s largest year-round turkey producer, Bernard Matthews Farms, in response to consumer demand for higher welfare standards,

Initially the company just looked at the effects of natural daylight.

Windows were installed in one of the company’s sheds, together with enrichments such as wooden perches, straw bales and various hanging objects. The windows were permanently uncovered and bird behaviour and welfare monitored every week over a 12-month period.

These observations were then compared against a control group in a standard production shed, with enrichments.

“The industry concern was that providing natural light would encourage pecking and more aggressive behaviour,” she said. “But the main finding was that, so long as the enrichments are appropriate to their age, there is no detriment to either bird welfare or health.

“We have also learned that variety is the key. Moving bales around each week and changing the type and position of the hanging objects keeps the environment novel and exciting, encouraging natural behaviour.

“When they are young, turkeys are like toddlers – into absolutely everything. Then they reach the ‘teenage’ stage and are more boisterous and therefore demand different environmental stimulation.”

The next stage of the research was to look at stocking rates, to see if changing the numbers of turkeys in sheds with windows and enrichments made any difference.

“We initially went for a lower stocking rate – about 20% below the standard Quality British Turkey rate. This was followed by studying a broader variety of reduced stocking densities. The main finding was that the provision of strategic enrichments ensures natural behaviours are exhibited consistently across a variety of stocking densities.”

The research looked at mortality rates, bird health and feed conversion and found that there were almost no differences between turkeys in sheds with windows compared with standard sheds.

Ms Sawyer has worked closely with the main animal welfare groups in devising and analysing the research, aiming to drive standards upwards, rather than waiting for new regulations.

Bernard Matthews Farms has been so impressed with these research findings that it is now rolling out windows to more of its production sheds, confident that bird welfare and performance will not be affected.

But the work does not stop there. Having established that using windows with enrichments does not adversely affect performance, Ms Sawyer is now looking to refine the research.

New projects are under way looking at different types of enrichment, namely feed blocks, different coloured bottles on ropes and nets filled with straw, to see how these affect the birds. And she is also trying to learn more about the shape and structure of perches and roosting platforms.

“During the 20-week growing cycle, birds’ preferences for perching has been known to change. We want to be able to provide something that will suit their needs at all stages from ‘toddler curiosity’ to ‘youth rowdiness’,” she said.