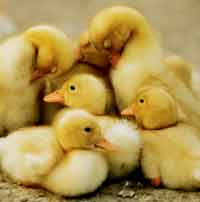 There is a widespread assumption that ideal welfare conditions can only be created for ducks if a source of open water is available, but new research shows this is not the case.

In an on-farm trial, it was clear that of all water supplies available to ducks – whether it’s via a trough, pond, shower or nipple drinker – birds overwhelmingly preferred spending time under the shower.

Although there is no looming regulatory need to offer extra water supplies to farmed ducks, producers – backed by the British Poultry Council – have supported the research, which also included detailed scoring of the birds on test to assess various aspects of their physical condition while alive and after slaughter.

The DEFRA-funded research was undertaken by Marian Dawkins and Tracey Jones of Oxford University, and they have been awarded a £1000 scholarship by the British Poultry Council.

They showed that ducks provided with showers spent over twice as much time using this facility for resting compared with those in housing offering water via a bath, trough or nipple drinker. They also drank almost a third more water in accommodation provided with showers.

Surprisingly, the research showed that there was little swimming activity among birds provided with a bath in the rearing environment, which the scientists described as showing “little importance” to the ducks compared with their preference for using the showers.

“The purpose of the trial was to assess the behavioural reaction to ducks when given access to a range of different sources of water in which to bathe. Commercial producers were fully supportive of the trial, but recognised that providing clean supplies of water for large numbers of commercially reared ducks – and keeping that water and the area around it clean – isn’t easy,” said Prof Dawkins.

Providing the most favoured source of water hygienically in commercial units will be the ultimate outcome of this trial.

The researchers acknowledged that as well as providing nipple drinkers to commercially-reared ducks as the most “hygienic” way of supplying water, ducks also needed water offered in a way that enabled the birds to keep their eyes healthy, usually achieved in the natural state by ducks immersing their heads while swimming.

Two batches of 60 Cherry Valley Pekin strain ducks were used in the trial. All pens were supplied with nipple drinkers at all times. Various water resources were also provided.

“Ducks made it very clear – they love to shower,” said Prof Dawkins. “They used the showers far more than any other source of water we provided. Now further research will have to be undertaken to study their behaviour more closely in terms of how often showering facilities are required. We have now acquired a commercial partner to look more fully at the impact of bathing resources on the birds’ health and welfare.

“Part of our future work will need to evaluate how often ducks use showers. Is it something they use regularly and individually throughout the day or something they use en-masse for short periods? These considerations are very important as commercial producers look at ways of providing an effective and clean water resource to enhance duck welfare.”

Although there was no marked difference in growth rates of ducks on systems offering varying sources of water, over half the birds moved into the treatment pens at 21 days after not having had access to showers or head emersion facilities, showed crusted eyes. All these affected birds had overcome their eye problems within 16 days of having access to showers or troughs.

Peter Bradnock of the British Poultry Council said the research would lead to enhanced welfare for commercially-reared ducks removing the emotive issues associated with farmed ducks and water.

“Ducks need water for cleaning and preening and this is the first step in how the most effective source of water can be supplied. Further research is already under way as ways of delivering these findings to current commercial systems is assessed.”