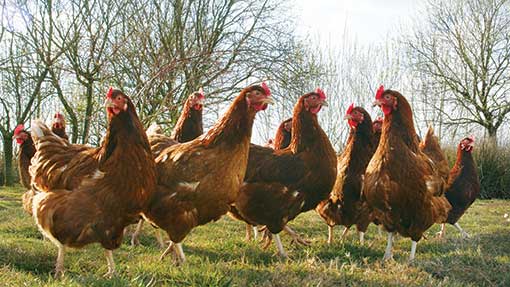 Massive investment in genetic research and development has delivered tangible gains to egg producers, but is not the answer to everything, as Poultry World reports

Increased early egg weight, lower bird weight gain during the second half of lay and extended production of saleable eggs are just some of the advantages brought to producers as a result of investment in layer genetics.

Over the past twenty years, first lay egg weights at 20 weeks have improved from 40g to 49g, going on to reach 59g by 26 weeks, explains Andrew Jackson, managing director of Hy-Line UK International. “This means that more saleable eggs are laid earlier in the bird’s life.”

And just as important is the fact that those eggs will maintain a consistent egg weight, and therefore saleability, which will extend right up to 90 weeks, he adds.

These improvements in consistency of egg weight have been accompanied by changes to the way that the Hy-Line Brown’s bodyweight changes over its life. Twenty years ago a typical layer would have weighed about 1.9kg at 20 weeks and would have continued to grow to a chunky 2.4kg at 80 weeks. But today’s bird grows from 1.65kg to no more than 2kg over the same time span.

“Although it grows rapidly to a point where it can produce efficiently, after that the growing process slows right down and the nutrition is going into egg production rather than putting additional weight on the bird,” says Mr Jackson.

But he also emphasises that genetics are just one part of a mixture of factors that contribute to the ultimate performance of the bird.

“As well as improved genetics, optimal nutrition, the highest possible levels of health and excellent flock management all contribute to ensuring the full potential of the birds is realised,” he says. “This is one of the reasons why we also place a lot of emphasis on technical services – both locally in the UK and across the globe. These services enable us to work in partnership with our customers to deliver the best possible performance from our layers.”

The pace of improvement in genetics is increasing due to the company’s multi-million dollar investment in its elite hatchery and research farms. According to Mr Jackson this will help Hy-Line progress its traditional genetics, but also enable it to take advantage of the new science of genomics.

This involves the use of gene markers to identify particular traits and is particularly useful in tracing genetic traits in males.

However, the appliance of this research is not as simple as some believe. “It isn’t just a question of matching one gene marker with one particular trait. For each trait there is a combination of gene markers and it requires a huge amount of computing power and data analysis, as well as studying a large number of birds.”

The investment in genetic research also means that new traits will reach the market more quickly. “We have a flatter production structure,” says Mr Jackson. “Because of the size of our research facilities we can now go from the research flock straight to grand-parent stock, effectively taking a year out of the time it takes for new traits to become commercially available.”

But one trait that continues to represent a challenge for all layer breeders is that of natural aggression, which can lead to feather pecking and even cannibalism. The industry’s response to date has been to incorporate beak trimming of day-old chicks, though with an impending ban on this practice looming, breed companies have been asked to step up their efforts to try and develop less aggressive birds.

“Bird welfare in all production systems has been an item of extreme importance in our genetic selection program for many years,” says Hy-Line president Jonathan Cade. “We are constantly developing new methods to evaluate behaviour-related traits and continue making improvement in this area.

“Current Hy-Line Brown genetics may allow some customers to raise our birds successfully without beak treatment. However, it is important to remember that pecking may be stimulated by many different management, environmental and housing factors.

“Consequently, we are of the opinion that the beak treatment option is still of great value, both in terms of hen welfare and of flock productivity. Therefore, we believe there is a requirement for the continuation of Infra-Red Beak treatment for the UK and the wider EU layer market.”

As one of the leading breeder companies, Hy-Line applies the highest standards of health, nutrition and management.

It works with a number of companies to deliver this and provides absolute transparency in its operations to these selected partners. One example of this is Merial Animal Health which supplies its Vaxxitek HVT + IBD vaccine for control of Gumboro and Marek’s Disease.

“Members of the Merial team visit the Hy-Line facilities and audit the vaccine administration on a very regular basis – around every four to six weeks,” says Merial Animal Health avian manager and veterinary adviser Helen Houghton. “We ensure that the highest standards are followed in handling and administering the vaccine and Hy-Line is happy for us to share this information with their customers.”

At the same time that vaccination takes place, the chicks also have their beaks treated using infra-red technology on a Nova-Tech machine. This non-invasive technique involves focusing a high intensity infra-red beam at the tip of the beak, which penetrates the corneum killing cells in the basal tissue. The beak tip is sloughed in 10-21 days.”