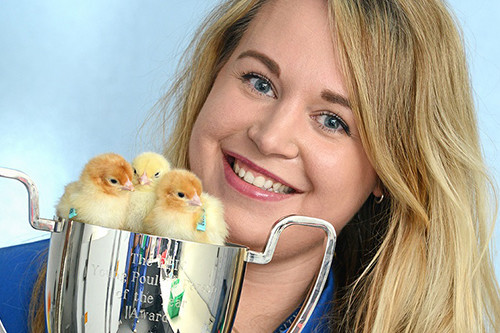 The EPIC organising committee is always keen to recognise the contribution of younger players within the industry, and so also runs its Young Poultry Person of the Year Award.

This is held annually in memory of the late Clive Frampton, whose Frampton’s egg processing business has been a major player in the egg sector for over 40 years.

The award is open to nominations and self-entries for anyone under the age of 40 who is making a difference in their particular part of a poultry business.

“Egg producers have dominated the awards since its inception, though last year we were delighted to present the award to Jessica Martin who has been blazing a trail in the area of veterinary research,” said chief judge Philip Clarke. “But the award is open to all and we are hoping for some standout entries from across the industry.”

As well as the prestige of winning, and the chance of a free trip to EPIC, previous winners have also spoken of the boost the award has given to their careers.

Entering or nominating is straightforward – simply write down in no more than 500 words why the candidate deserves to win and email the entry to:

The winner will be invited to attend 2018’s EPIC at the Celtic Manor Hotel, South Wales on 4/5 October, and will be announced at the conference banquet on the Monday evening.

Previous winners of the Young Poultry Person of the Year