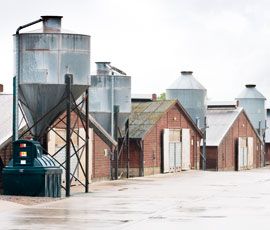 The Environment Agency says it has changed its mantra from one of “no, but” to one of “yes, if”, as it tries to become more responsive to the needs of the poultry sector.

Addressing the “poultry breakout” session at the NFU conference in Birmingham, EA environment director Ed Mitchell admitted the agency had made mistakes in the past.

“It has always been our core purpose to protect and enhance the environment within the context of sustainable development,” he said. “Perhaps we’ve done more of the protectingbut we know that we must also minimise the regulatory burden that we place on our customers.”

Farming had an improving record in terms of its environmental performance, Mr Mitchell explained. For example, there had been a 10% reduction in ammonia emissions from the pig and poultry sectors since 2007.

And, of the 900 permitted poultry operations in England and Wales, only five were considered sites of “high public interest”, meaning subject to persistent complaints which the EA thought were justified.

But if there was a problem, it was when it came to dealing with odour complaints. “My personal experience is that odour is under-estimated as an impact on people’s lives, and I’ve not come across that many cases where there is persistent complaining that does not have justification.”

When it came to IPPC licensing, Mr Mitchell admitted that the EA had been on as much of a learning curve as producers, when farming was first brought under the IPPC regulations. “We had a not an insignificant number of teething problems,” he said.

The EA had been caught out by the rapid market expansion at the time. By 2009 there were 133 farms held up in the backlog, he said. The EA had set up a dedicated permitting team and, even though the backlog had now cleared, that team had been retained.

Mr Mitchell also explained that the EA had improved the processes for assessing ammonia depositions by analysing mosses and lichens. By using better evidence of damage levels, fewer farms were now being screened in.

It had also sought to simplify the forms, and set up a dedicated pre-application service for farmers.

Code of Conduct for odour

The NFU is working with industry bodies to develop an industry-owned Code of Conduct for odour for both the pig and poultry sectors.

The code, which will include guidance for producers on how to manage complaints, comes amid concerns about issues with persistent complaints from nearby neighbours about odour, noise and dust.

Are you satisfied with the performance of the Environment Agency? Share your views by writing to the editor at philip.clarke@rbi.co.uk or post a comment on our online forum.