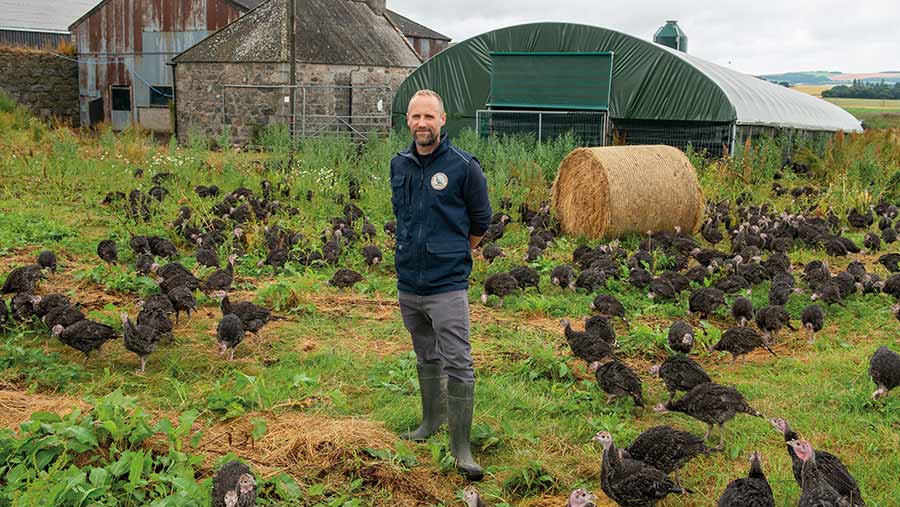 A little bit of positivity can go a long way in the poultry sector, but when you possess it in spadefuls, the opportunities are seemingly boundless.

That is certainly the case for Aberdeenshire-based seasonal turkey grower Craig Michie, who impressed the judges with his energy, enthusiasm, and “can-do” attitude.

Based on his parents’ arable farm in the north-east of Scotland, Craig got into turkey production eight years ago, following an initial career as a town planner.

One of the grain sheds on the farm was retrofitted to allow turkey poult rearing, as well as grain storage and processing, and through close attention to detail and canny marketing, Barra Bronzes has achieved a 500% sales lift in the past five years.

Getting the poults off to a good start is crucial, says Craig, which means plenty of light, ventilation and stimulation. Birds are brooded at a low stocking rate of just 300 poults to a ring – females only as they offer better taste.

Great emphasis is placed on the diet, using ingredients that are primarily grown on the farm. “As well as a cost saving of about £100/t, this enables us to market our birds as low in food miles,” he says.

About 30% of the feed is oats, giving the carcass a creamy finish. It is also high in antioxidants, which is good for gut health. A decision has also been taken to replace soya in the diet with locally grown peas, which SAC Consulting estimates improves the birds’ carbon footprint by 10%.

There is also a strong focus on biosecurity, with bird mortality low at just 1.5%.

To capture a bigger margin, almost 90% of the birds are now sold direct to customers. “We were averaging £48 a bird sold to butchers and restaurants, compared with £84 a bird to the end consumer, so it makes sense,” says Craig.

A huge amount of effort goes into marketing, with Craig making regular appearances at food fairs, shows and other events, to sell his wares and tell the public about turkey production.

Development of the website has also been a priority. “The aim is to make this as relevant as possible in order to score favourably in the Google algorithm, so that we rank on page one when people are searching,” he says.

To generate year-round revenue, he has also created his own range of game-hung turkey burgers and sauces, which sell for £7 apiece at events. More than 40 burgers can be drawn from just one turkey.

Craig is not short of ideas when it comes to  taking  his business to the next level, either.

He wants to grow turkey numbers to 5,000 in five years, which would involve putting up another couple of polytunnels. And he wants to sell the birds as “carbon neutral”, which might be achieved by planting more trees and installing a large solar array.

Another idea is to develop a drive-through turkey rotisserie beside a main road that runs past the farm.

And he is considering offering a “whole Christmas experience” on the farm. “It’s one thing to put up a sign, but another thing to show people it’s for real,” he says.

“It was a pleasure to meet Craig on his beautifully scenic Scottish farm and learn about his ambitious expansion plans for his inspiring business. His attention to detail and consumer focus was impressive and he is a very deserving winner.”
Aimee Mahony, NFU chief poultry adviser