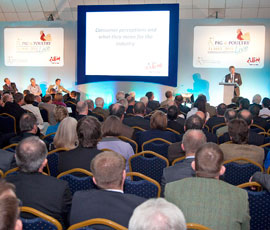 Industry leaders believe farmers needs to “own the debate” around issues such as GM and the possible re-introduction of Processed Animal Protein (PAP) in feed, and win over opinion formers through education, honesty and positive messages.

Mark Williams from the British Egg Industry Council (BEIC) told delegates at Pig and Poultry LIVE 2011 that the egg industry had been very successful in overcoming the stigma of salmonella by getting in touch with community leaders and this could be applied to GM and PAP.

“We learnt a long time ago, you influence opinion formers and consumers will go with itit’s a long process, but the two subject areas we have touched on require additional effort,” he said.

The Red Tractor was highlighted as the best means for the industry to promote itself, with both David Clarke of Assured Food Standards and poultry producer James Hook of Hook 2 Sisters throwing their support behind the assurance label.

“It we can all get behind it [Red Tractor] and do that consistently, not only the NFU but the levy bodies too, then we’ve got an opportunity to get through to opinion formers and shoppers,” said Mr Clarke.

But Rob Ward from Food Marketing Network said farmers should focus on speaking directly to consumers, rather than focussing on opinion formers.

“I would encourage the industry to go out there and focus on winning the hearts and minds of consumers, and then retailers will follow,” he said. “It isn’t ‘one to many’, but ‘many to many’ and that’s how opinions are formed.”

But Mr Hook believed that the outcome of the debate on the inclusion of GM and/or PAP in rations rested with the retailers. “If they decide it’s okay for us to use GM or PAP, then we will be using it. If they don’t, then we won’t. It is in our interest to keep talking to them, to keep the dialogue up. Surely, but slowly, we’ll get there.” he said.

Delegates at the meeting were fairly united in supporting the inclusion of GM ingredients in poultry rations, with 87% believing the benefits outweighed any consumer objections.

But asked the same question in relation to PAP, only 36% said the benefits to the pig and poultry sector outweighed consumer objections.