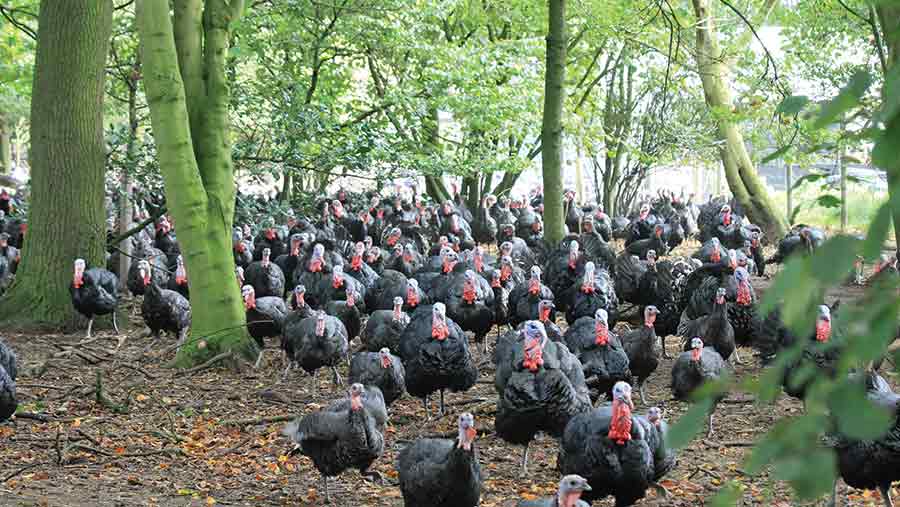 A natural approach to rearing geese and turkeys produces a high-quality product that commands a premium price. Philip Clarke reports.

When it comes to free-range poultry production, things don’t get much more “au naturel” than they do for the geese and turkeys at Steve Childerhouse’s Great Grove Poultry in Norfolk.

The Childerhouse family has farmed at Whews Farm, near Attleborough, since the 1940s, after their existing holding was requisitioned by the army during the Second World War.

They diversified into geese about 20 years ago, starting with just four birds. “We placed a sign for ‘plucked geese’ at the top of the farm drive and the birds sold quickly,” says Mr Childerhouse.

“The following year we raised eight geese and 20 turkeys and the business has kept on expanding to where we are today – selling about 800 geese and 9,000 turkeys at Christmas.”

The emphasis is very much on keeping production as natural as possible, while minimising the labour input. For most of the year, the farm is run by Mr Childerhouse and one other full-timer, Arthur Hall.

The turkeys arrive as day-old poults in May and June and are housed in tin sheds for brooding under gas heaters.

Two-thirds of the birds are bronze birds and the other third white, supplied by both Kelly Turkeys and Hockenhull.

The poults are beak-trimmed at the hatchery using infra-red beak treatment. “This is not compulsory, but we’ve seen in the past what they can do to each other if their beaks are left intact.”

The birds are then moved out at eight-10 weeks old – some going to grass paddocks and others into areas of traditional woodland. “This provides them with a stress-free environment, allowing them to roam in their natural habitat,” says Mr Childerhouse.

They do have the opportunity to go back into straw-bedded sheds or polytunnels for feed and water, but the doors are left open 24/7. The sheds are bedded down twice a week, and big bales are also left in stacks outside, to provide the turkeys with perching.

“We also spread a lot of straw at the entrance to the buildings, to help keep the birds’ feet clean and help contain any disease threats.”

Foxes are not that much of a problem, Mr Chilederhouse insists. “We used to shoot them, but now we just have a 5ft-high perimeter fence, with electric strands top and bottom.”

The birds are started off on a crumb for the first five weeks, then a grower ration to week 12, when they then move on to a finisher ration until they reach full maturity at 24-27 weeks. “We also give them lots of whole oats – a good, natural feed which really adds to the bloom of the bird, giving it additional fat for cooking.”

The goslings arrive in June, from Gullivers Geese and Eddie Lloyd Poultry, and are reared inside for the first two-to-three weeks, then gradually given access to the grass, though they are shut up at night until week five.

They are initially fed a starter crumb, high in protein (20%) with additional vitamins and minerals.

Once they have enough plumage to keep them warm and dry, they are then left outside full-time on open grassland, with hedges for shade and shelter.

“This is pretty unique to us, as most goose producers will continue to house their birds at night,” says Mr Childerhouse. “But we are always looking to save on labour. Shutting up 10,000 birds every night is a hell of a job. Leaving them out is more natural.”

The main diet for the geese is grass and wheat, supplied by a neighbouring arable farmer and left in open troughs in the field. “Our geese have a very distinctive golden colour to their skin, achieved by feeding them on their natural diet.”

For the last month, they also receive a finisher diet.

With outdoor birds, Mr Childerhouse says he is very conscious of the risk from wild birds spreading avian influenza. There is no open water on the farm. And, while it would be easy enough to shut up the turkeys in the event of an outbreak locally, he is also confident he could house the geese in pig tents or polytunnels.

When the turkeys are ready for processing, they are all walked down the yard slowly and into a holding pen and then a darkened green shed to calm them down.

They are shackled and stunned with an electric rod, before being stuck in the back of the throat to cut the four main blood vessels.

The wing feathers are pulled by machine, before the birds are then plucked on a Bayle machine, then hand finished. They are then weighed and hung on racks in the chill room where they stay for 14 days to mature.

They are then eviscerated and boxed, wrapped in greaseproof paper, with herbs and a recipe leaflet.

The process for the geese is very similar, though the whole bird is dipped in wax for plucking, rather than just the wings, and they are laid in racks rather than hung to mature. The goose feathers are also collected in bags as a saleable commodity.

“Most of our equipment has been sourced second-hand – it’s amazing how much money you can save shopping on eBay.”

When it comes to selling his birds, Mr Childerhouse pretty much has all bases covered.

The majority are sold to butchers, farm shops and food halls, but about 450 birds are also sold direct to the general public, who can come to the farm to collect their orders.

“We put up a lot of roadside boards to attract custom, and also push our website. We have also produced a special brochure for butchers.” There is a strong emphasis on branding, with the Great Grove name coming from the name of a plantation on the farm.

While customers are encouraged to order online, Mr Childerhouse has opted out of the home delivery business. “Logistically its hard work – and extra hassle we could do without.”

But he is keen to develop the turkey products side of his business and has requested any producers with left over supplies after Christmas, including brown meat, to get in touch.