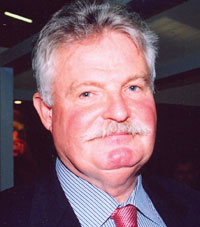 UK egg producers are not the only ones facing a crisis in January 2012 when the cage ban comes into force.

Producers in France have received the same unequivocal message from their government as those in Britain, which is that they will not be allowed to keep any birds in conventional cages after 1 January.

Exhibitors at SPACE 2009 last month, France’s leading livestock show at Rennes, Brittany, were mostly in agreement that there would be a drastic shortage of eggs throughout the EU if there were no changes in the timetable.

It is estimated in France that with only two years and four months of active life remaining, traditional cage production is still responsible for 70% of the intensive shell egg market. The balance currently comes from three million hens in enriched cages and 1.5m in floor systems [barn].

The French industry view is that the EU Commission will have to accept that there is no way that the gap can be filled and extra time must be introduced.

“Producers are not taking too much notice of the 2012 deadline. They know Brussels will have to give them four or five extra years, or leave the EU short of eggs,” said one cage manufacturer at the Rennes show.

But on the stand of Lohmann France, Dominique Joye (pictured, above) was confident that the power of the supermarkets would prevail and there would be enough legal eggs to satisfy demand, although not all from enriched cages. New free range and barn flocks would contribute 60% of the requirement and enriched cages the rest.

“Supermarkets will say to suppliers that there is no way that they intend to be fined for stocking an illegal product and, given the pace at which new flocks are being placed, I am confident the gap will be filled on time,” he said.

The current cost of financing the switch to enriched ranges varied from €12 to €25/bird placed (£10.90-£22.60) depending on whether existing housing was available.

If the farmer had 300,000 plus layers, there was no problem in raising finance. The bank knew that the feed supplier could not afford to let it go under. It was the producers with a few thousand layers that were coming away empty handed, except in Brittany where feed companies were supporting producers regardless of size. 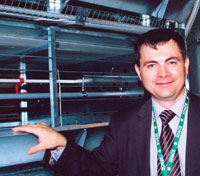 “We have gained a very decent market with the lower prices, and our feed distribution system is attracting a lot of attention. It is designed so that all the hens get an equal share of the ingredients,” said Mr Kovalsky, who had no immediate plans to bring the Texha to the UK, but was considering the Pig and Poultry Show in May 2010.