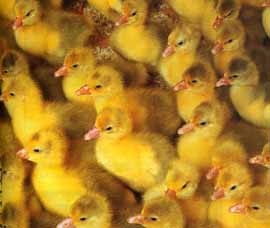 The extreme cold of last autumn, which saw crops and farm buildings damaged as well as much of the nation’s transport links grind to a halt, was a boost for goose producers, leading to better quality birds.

“The weather provided the perfect environment to finish the birds, which is reflected in our survey as a much improved performance in the range of weights,” Eddie Hegarty, partner of Norfolk Geese and chairman of British Goose Producers, said. “The geese were on average at least half a kilogram heavier.”

The Norfolk Geese production survey put the extra weight down to the high quality of early grazing combined with the frosts, stimulating the birds’ appetite.

Gosling prices remained static in 2010, which meant a good return for producers, but due to the rise in feed costs Norfolk Geese will be lifting the price of its goslings in 2011 by around 6%.

Demand for organic geese has also prompted the company to expand its organic rearing operation, with a second-generation organic flock supplying goslings to producers from their Essex farm.

Goslings will be available from mid April.