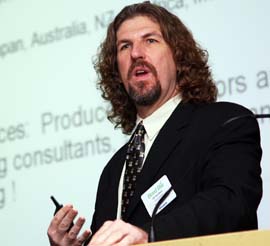 Demand for poultrymeat and eggs is increasing on all fronts and all hands are needed to keep up with it, producers heard from experts at the recent East Midlands Poultry Discusssion Group meeting.

China had enough to do to feed its own millions to be a serious, long-term contender, he said. But Brazil, the “gorilla” of world poultry exports, was going the right way about becoming the planet’s poultrymeat larder.

Brazil had targeted agriculture as its speciality, they had the climate and the land and were happy to leave other nations to produce the electronics, the vehicles, the fridges and the washing machines.

“Do you have to compete with Brazil? Absolutely. But they are only supplying a fraction of your market. Poultrymeat exports across national boundaries account, depending on the year, for 15-20% of total world production,” said Mr Heckman.

Despite the short-term crises that hit the international market from time to time, the long-term prospects were bright for poultrymeat and brilliant for eggs as age expectancy worldwide increased.

Third-world populations were coming off grain-based diets onto protein, with chicken and eggs as the first port of call. Both were easy to digest, low in fat and offered the best value for money, he said.