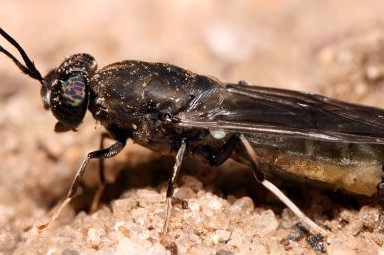 Entomics Biosystems Ltd is one of 53 businesses to receive financial support from Innovate UK, which today (Wed) announced a total funding package of £17.44m.

Entomics says that each year over 1.3bn tonnes of food are wasted globally, worth $1 trillion, and if food waste was a country it would be the third largest emitter of greenhouse gasses after the US and China.

Insect biomass conversion is an emerging practice where waste is fed directly to insects, which in turn convert low value biomass into higher value insect mass, rich in proteins, fats and chitin.

At Entomics, the company is developing enabling technology solution for the growing insect food food and feed sector. It has been focusing on the Black Soldier Fly, looking at two specific projects, which has support from Innovate UK and the European Institute of Technology.

• Its Metamorphosis project is looking to overcome the challenge of processing of insects into meals. Although it is possible to merely dry insects and mill them into powder, this misses many nutritional, health and well-being benefits. Entomics is developing a comprehensive insect biomass processing pipeline that seeks to transform raw insect biomass into function meals aimed at maximising the benefits for target species.

• Its Genesis project looks at decentralised waste biomass solutions and on-site insect production. Logistics present one of the key challenges in low value biomass waste valorisation: it often costs more to transport the waste than the value that can be harnessed from it. However, with eggs and nymphs weighing only a fraction of harvest-weight larvae/pupae, it is possible to avoid this bottleneck by delivering these onto the site where the waste originates.

Entomics is led by CEO and co-founder Matt McLaren and involves a range of partners including the Medical Research Council, Eastern AgrTech, the BBSCRC, and faculties at Reading, Sheffield, Stirling and Cambridge Universities.

Fionnuala Costello, head of open programmes at Innovate UK, said: “All of these projects are tackling issues that affect many people and cover key sectors linked to the government’s Industrial Strategy. They have the potential to have a lasting impact.”