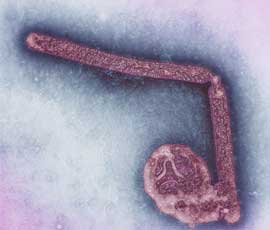 Scientists are to resume research into how the deadly H5N1 avian flu virus might mutate and spread among humans.

A letter signed by a team of 40 scientists was published in the journals Nature and Science declaring an end to a 12-month voluntary moratorium.

The research had been stopped amid concerns that modified viruses could escape from laboratories and spread or end up in the hands of terrorists.

But following a safety assessment, scientists at Erasmus University in the Netherlands and the University of Wisconsin-Madison, USA, said the work would resume.

Dutch virologist Ron Fouchier, from the Erasmus Medical Centre in Rotterdam, said ferret experiments with new strains of the H5N1 virus, which can spread via airborne droplets, could begin within weeks.

“We really need to understand how these viruses become airborne,” said Prof Fouchier.

His colleague Yoshihiro Kawaoka, from the University of Wisconsin-Madison, said the research could help us deal with any bird flu pandemic among humans.

“The greater risk is not doing research that could help us be better equipped to deal with a pandemic,” he said.

According to the World Health Organisation, over the last 10 years there have been 610 confirmed cases of H5N1 in humans in 15 countries, of which 360 have died.

The H5N1 strain is easily transmissible humans through direct contact with infected poultry. But researchers fear the virus could mutate and spread rapidly between humans.

The research could help scientists to develop vaccines, anti-viral drugs and diagnostics that could be used in the event of a pandemic.