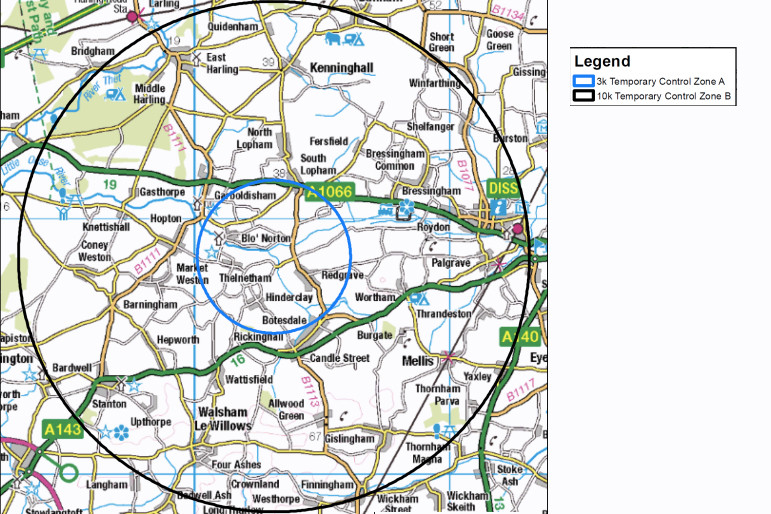 It is the 7th case of bird flu found in a UK commercial poultry flock since December.

Previous confirmed cases in the UK

The H5N8 strain of the disease has previously been confirmed at 3 linked premises on a commercial game farm in Lancashire and at 3 separate poultry farms in Lincolnshire.

It has also been found in wild birds in England, Scotland and Wales and in backyard flocks in North Yorkshire and Carmarthenshire.

A 10km Temporary Control Zone has been established around the affected premises near Redgrave in mid-Suffolk after lab tests confirmed the presence of a strain of H5N8.

The farm is owned by Banham Poultry, an independent family business employing 1,000 people with a turnover of £130m/yr.

A spokesperson for the company said: “We have had a single case of avian influenza (bird flu) confirmed on a Suffolk Farm on the evening of Sunday 12 February 2017. The affected farm does not produce meat and is instead a breeding rearer farm.

“The infection was confirmed after we notified the Department for Environment, Food and Rural Affairs following increasing mortality in one of our flocks.

“They will now be humanely culled by the authorities in accordance with EU legislation.

“Birds at our other farms appear healthy and there is no evidence of any spread of infection. All of our staff are trained in biosecurity management and we are ensuring that the controls that are in place are rigorously followed. We will continue to cooperate with the authorities to ensure that the situation remains under control.”

A Defra statement said further investigations would continue to establish the possible source of the infection.