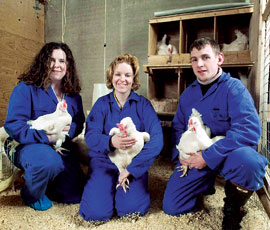 The next step in reinvigorating the poultry training facilities at Harper Adams has been taken with the opening of a brand new colony cage unit.

One of the buildings on the ageing site of the National Institute for Poultry Husbandry, across the road from the University College itself, has been completely refurbished as a part-commercial, part-experimental unit.

The investment has come though a partnership with locally-based Oaklands Farm Eggs, now one of the UK’s leading packers producing nearly 500 million eggs a year.

The new unit houses 68,000 birds and has been fitted out along commercial lines to supply colony eggs to the Oaklands business in readiness for the conventional cage ban next year. A key difference, though, is that the house is equipped with 10 different cage sizes so that students can conduct observations on performance and welfare under different colony sizes. The smallest cage contains 20 birds and the largest 100 birds.

The house was originally a deep pit laying house with four tiers of conventional cages. It now features seven tiers of colony cages with manure belts. One modification to a standard seven-tier unit has been to put a grid floor in above the fourth tier so that students can access the upper tiers safely and easily.

Oaklands director Elwyn Griffiths said: “At Harper, we have taken the opportunity to do what we can’t always do commercially. We see this development as providing a high-quality test bed to benefit our business as well as the wider industry.

“Attracting young people into the industry is a problem. We hope this will open their eyes to what is involved in running a poultry farm – so understanding efficiencies, economics, welfare and feed conversions in hope of getting students interested. “

Fitting the unit out with the different cage size was no problem for Oaklands, because they installed their own Tecno system using their own installation team. The Tecno system won the Health and Welfare accolade at the Pig and Poultry Marketing awards 2009.

“It is a significant development for us, and is one that is of benefit to both students and the poultry sector in the long-term.

“There is also a lot of research to be done on poultry and egg production in areas such as animal welfare and colony environments. Working alongside industry, we see a strong future for research in this area.”

The new colony house is the second new unit to benefit students at Harper in recent years. The college already has a new free range unit constructed from scratch and fitted to modern commercial standards.

It is not just the egg sector that has been actively strengthening its ties with the college. There has also been a programme of sponsorship and involvement from the poultrymeat side of the industry.

Back in February, nine scholarships were presented to Harper Adams students through the new British Poultry Council (BPC) Scholarship scheme. The nine students will each receive a salaried outside placement year during their time at Harper Adams, plus £3,500 towards their fees for the years before and after the placement.

The scheme has evolved from the PD Hook scholarship, and is now supported by that company together with Aviagen, Bernard Matthews, Cargill Meats, Cranberry Foods and Gressingham Foods.

BPC senior executive officer Richard Griffiths also explained that the BPC was interested in the idea of sponsoring a broiler training unit at the college, but this was still very much at the “blue sky” stage.