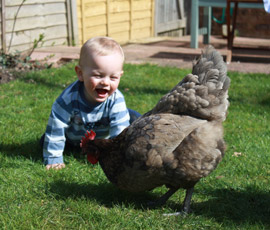 Referring to chickens as “bird brained” may be a misnomer: a new academic review has revealed they can outperform young children when it comes to numeracy and logic.

They can also exercise greater self-control – a classic test of intelligence – choosing to turn down one reward if there is the prospect of receiving a better one.

The research, undertaken by the University of Bristol, found that chickens had an instinctive physical awareness from hatching. They can keep track of objects that fall out of sight – a skill human babies do not pick up until about 12 months of age – and have an innate preference to objects “that they know make sense”.

They are also born with the ability to keep track of numbers up to five, unlike humans, who have to be taught to count, the report says.

Christine Nicol, professor of animal welfare at the University of Bristol, co-authored the review with Robbie L’Anson-Price. It was sponsored by the Happy Egg Co.

Ms Nicol said it was important for people to recognise there was more to poultry than meets the eye, as well as “the importance of providing these amazing creatures with the environment that enables them to live out their natural instincts”.

A spokesman for the Happy Egg Co said the findings of the report, entitled The Intelligent Hen Study, would inform range and enrichments’ design on its farms.

What are your thoughts on this? You can comment below, or join the discussion on the Poultry Platform